Yeom from a long line of Catholics

Yeom from a long line of Catholics 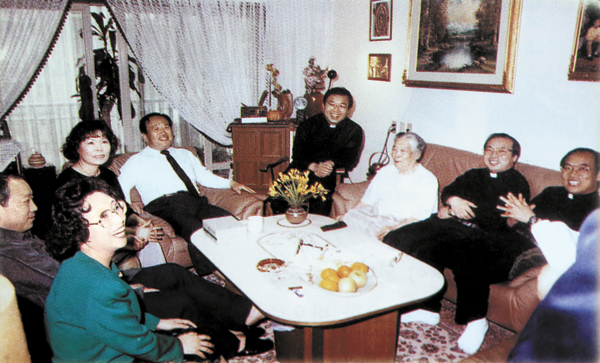 In Korea, Roman Catholicism is known to some as a religion of potters. The idea dates back to the 18th century, when the history of the religion first blossomed on the peninsula.

During the Joseon Dynasty (1392-1910), the Catholic Church suffered relentless persecution at the hands of the government - mainly for denying ancestral worship -after the religion was first introduced in 1784 by Yi Seung-hun, who later died a martyr.

The brutal oppression, which claimed the lives of more than 8,000 people during that era, forced many faithful to take refuge in remote mountains regions, where they made a living producing pottery and charcoal.

Seoul Archbishop Yeom Soo-jung, who was among 19 men recently appointed by Pope Francis as cardinals, is one of the few descendants of those potters.

The archbishop’s great-great grandfather, Yeom Seok-tae, fled persecution and took shelter in Okcheon, North Chungcheong. There, as the family’s breadwinner, he sold his own pottery, Cha Ki-jin writes in his book “The Story of a Devout Catholic Family,” which chronicles the family history of the 70-year-old religious figure.

In the book, Yeom himself states that he comes from a family of potters. The elder Yeom and his wife Kim Maria were arrested and executed in 1850 for their beliefs when kingdom officials invaded Okcheon. The late Yeom was a high-ranking government official, though little is known about his life.

“It’s quite hard to trace Yeom’s family genealogy,” Cha said. “I think this is because records were omitted because of their religious beliefs. So, we can rely on stories passed down from one generation to the next, or through other informal records.”

But despite the brutal crackdown, the Yeom family kept their religious beliefs alive for generations, eventually settling in Anseong, Gyeonggi.

After Catholicism was recognized as an official religion in the 20th century, Yeom family members were able to freely practice their faith. Three of the family’s descendants, including the cardinal-to-be, served as priests.

The archbishop’s two younger brothers, Yeom Soo-wan and Yeom Soo-eui, have also followed in his footsteps, running two dioceses in Seoul. They are the first and only family in Korea to have three priests.

Cha said that Yeom’s mother had long prayed for her three sons, hoping they would dedicate themselves to priesthood.

“There are more priests and nuns among Yeom’s relatives, and this is very unusual,” Cha noted. “The Catholic community in Korea regards Yeom’s family as devout religious figures, and holds them in high regard because we acknowledge that they and their ancestors survived persecution [and lived to serve].”

Yeom graduated from the Catholic University of Korea with a degree in theology in 1970 and became a priest the same year. He was appointed as the archbishop of Seoul in May 2012, succeeding Cardinal Nicholas Cheong.

Yeom was one of 19 new cardinals appointed on Sunday by Pope Francis. The 70-year-old archbishop will be Korea’s third cardinal, following the late Cardinal Stephen Kim Sou-hwan and Cardinal Nicholas Cheong Jin-suk.

He pledged to serve the poor when he is named cardinal next month.

Yeom will be formally elevated to the rank of cardinal at an official ceremony on Feb. 22 in Rome.