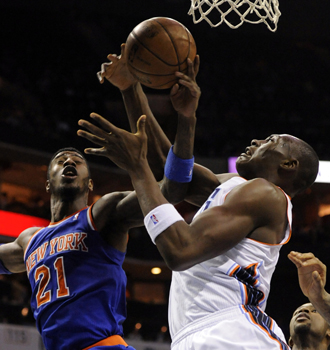 Al Jefferson scored a season-high 35 points, Kemba Walker had 12 of his 25 in the fourth quarter and the Charlotte Bobcats snapped the New York Knicks’ five-game winning streak with a 108-98 victory Tuesday night.

The Bobcats were in need of a win after losing three straight games and eight of their last 10.

Walker was 4 of 4 from the field in the fourth quarter, including 3-pointers on back-to-back possessions. He also finished with seven rebounds and five assists.

Gerald Henderson chipped in with 17 points for Charlotte (16-23), and Michael Kidd-Gilchrist had eight points and seven rebounds after sitting out the last 19 games with a broken left hand.

Carmelo Anthony led the Knicks with 20 points and six rebounds.

The Knicks (15-23) lost in Tyson Chandler’s return to the lineup after missing four games with bronchitis. J.R. Smith was benched for the second time in four games.

The Bobcats led throughout the second half, but the Knicks cut the lead to four with less than 11 minutes remaining.

That’s when Walker began to take over.

After a timeout, Walker scored a layup on a nice one-handed feed from Jefferson, who had drawn double coverage. Walker then knocked down a pair of 3-pointers, including a 29-footer from the top of the key to beat the shot clock. Jefferson added an inside jumper to push the lead to 13 and the Knicks never challenged again.

Jefferson finished 14 of 20 from the field and had eight rebounds.

After giving up 23 second-chance points in a loss to the Chicago Bulls on Saturday, the Bobcats limited the Knicks to just two in the first half to take a 55-46 lead at the break.

Jefferson had a huge first half, scoring 19 points on 7-of-9 shooting as the Bobcats outscored the Knicks 22-14 in the paint.

Kidd-Gilchrist, the No. 2 overall pick in the 2012 draft, returned to the starting lineup for the first time since Dec. 3. He was rusty, missing a few layups, but provided a needed presence on defense.

The Bobcats were 7-12 without Kidd-Gilchrist in the lineup. AP