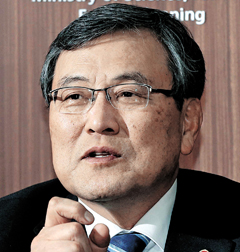 Going into his second year as minister of science, ICT and future planning, Choi Mun-kee feels burdened. Much focus has been on him and his ministry since the Park Geun-hye administration reordered the ministry, combining science and information and communications technology, or ICT, as part of the “creative economy” initiative.

Choi’s life has similarly been a complicated mix of diverse careers. The 62-year-old from Yeongdeok County, North Gyeongsang, studied applied mathematics at Seoul National University, then obtained a master’s degree in industrial engineering at Korea National University and another at the Korea Advanced Institute of Science and Technology (Kaist).

He started his career as a researcher at the Electronic and Telecommunications Research Institute (ETRI) and stayed there for 21 years, with a break to get his Ph.D. in operations research at North Carolina State University.

He eventually became president of ETRI from 2006-9, when he got the nickname “master of convergence” because of his wide-ranging research projects.

In 2009, he started teaching business administration at Kaist because, in his words, there wasn’t anyone else there with a business background. And today, he is leading the revamped Science, ICT and Future Planning Ministry.

“If something new comes up, I tend to be the one who is ordered to get it going,” Choi said.

The JoongAng Ilbo met Choi at the ministry’s office in the Gwacheon Government Complex on Monday. He was somewhat distressed about the public’s negative view of his ministry but was eager to nurture the young ministry.

Q. Many experts said that the Science Ministry did not produce much last year.

A. Our ministry officials worked hard over the past year, but they were hurt by such criticisms. I think we were unfairly criticized in three areas: that the Science Ministry officials can’t even integrate, that the ministry isn’t doing anything and over the idea of the creative economy. I could understand people who asked this question back in June or July last year, but if they still ask this, they should ask themselves if they are projecting their own problems.

Some criticized that you and your ministry do not have enough influence.

I would accept such criticism if I talked big, as if the Science Ministry is the “control tower” of the Park Geun-hye administration’s creative economy efforts. Our ministry, however, kept a modest attitude, acting as a mediator with other ministries.

But isn’t the Science Ministry actually the control tower?

We lack the authority, budget and other aspects to be the control tower. It would be more accurate to refer to the Science Ministry as a coordinator between ministries. The Ministry of Strategy and Finance is the control tower, and our ministry is the mediator that coordinates diverse opinions.

The Science Ministry is supposed to come up with next-generation business areas. What are you focusing on?

It is our main job to create a good business ecosystem for the next outstanding industries and help them to commercialize their technologies and products.

Also, we should plan specific strategies for developing the space industry as a next-generation growth engine. The first step will begin with developing Korea’s own rocket launch pad. The ministry will work with private technology industries in mapping out the project, maintaining a close relationship to nurture R&D capabilities and eventually commercialize the technologies. As part of efforts to converge every capability from the private and public sectors, the ministry is considering building a technology center.

What if the next president reforms the ministry again, eliminating the current form?

Korea has developed economically so far by catching up to other countries, but now there is no one to catch up to. The country has to become a leader that creates value-added business possibilities. When science and technology develop, they open business opportunities by being applied in different industries, like by IT. IT and science should remain integrated.

What specific achievements do you hope to accomplish?

President Park announced her three-year economic innovation plan at the beginning of the month. So, our ministry hopes to produce substantial results that actually help the economy in next three years, by 2016. The ministry organized a group to facilitate efforts with some private sector experts in November last year ... to explore and support the next-generation industries.

The strategic growth committee will announce the 10 best growth industries in February and will move to launch business projects with private companies.