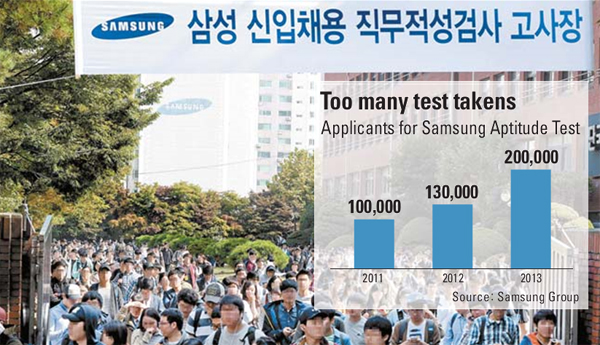 Applicants come out of a high school in Gangnam, southern Seoul, last October, after taking the Samsung Aptitude Test. [NEWSIS]

Samsung Group said yesterday that it will reduce its dependence on aptitude tests to choose new hires, admitting that its own custom-made test has cost job applicants a lot of money spent on cram schools.

The Samsung Aptitude Test, or SSAT, which many potential Samsung applicants have spent tens of millions of won studying for, will be given less attention in the hiring process, Samsung said. So too will other “specs,” like grade point averages and standardized test scores.

But its announcement created some confusion as hopeful future employees are wondering how to get ahead in their applications.

Since 1995, Samsung has adopted the Samsung Aptitude Test as part of its “open recruitment policy.” The written test measures candidates’ linguistic, mathematical and inferential abilities as well as common-sense knowledge. It is designed to sort out the most talented applicants regardless of their backgrounds.

Jobs at Samsung are the most coveted by corporate-career seekers in Korea, and many college students, including freshmen, have flocked to expensive cram schools that claim to be able to teach how to do well on the test.

The test costs Samsung, too. The group spends more than 2.5 billion won per year to hold the test across the country.

“The social burden is mounting in our process of recruiting talents,” Rhee In-yong, Chief Communications Officer at Samsung, told reporters at the company’s Gangnam, southern Seoul, office. “We needed a reasonable adjustment.”

Firstly, Samsung said it will put in place additional procedures to reduce the number of people qualified to take the SSAT. Until last year, Samsung opened a biannual SSAT test to anyone who met the minimum requirements in their GPA and English-proficiency test scores. In the future, it will start a new screening process to narrow down the candidates chosen to take the SSAT, Samsung said.

The group stressed that the process will be another platform for applicants to express themselves, not an additional burden on them. It said the new screening process will not be dominated by the eight specs that students obsess over: degrees from prestigious universities, GPAs, Toeic scores, licenses proving vocational ability, language training overseas, contest awards, internships and volunteer work.

“We will not look at unnecessary specs in the screening,” said an official of the group.

Samsung said the screening process will be launched as early as this month. The frequency of SSATs, however, will remain at twice a year.

Samsung said it will also get more proactive and visit colleges on a regular basis. Employees or executives of the group who are alumni of colleges will meet students and gauge which of them can take the SSAT without screening, Samsung said. About 30 universities across the country will be subject to its recruitment visits, the group said.

“It is a de facto pre-job interview,” the Samsung official said.

Samsung also said it will allow the presidents of local universities to recommend top talent to the group, which it dubbed a “new approach.”

The group is expecting around 5,000 students to be recommended by the presidents of around 200 universities across the country. The recommended students will be able to take the SSAT without being screened, it said.

“With this recommendation system for students acknowledged for their talents in college communities, we expect to contribute to creating an environment for college students to study harder,” Samsung said.

In 2012, Samsung adopted a quota to hire outside the traditional elite. It filled 35 percent of new jobs for college students with people graduating from colleges outside Seoul and 5 percent with people from poorer families. It will maintain those quotas, the group said.