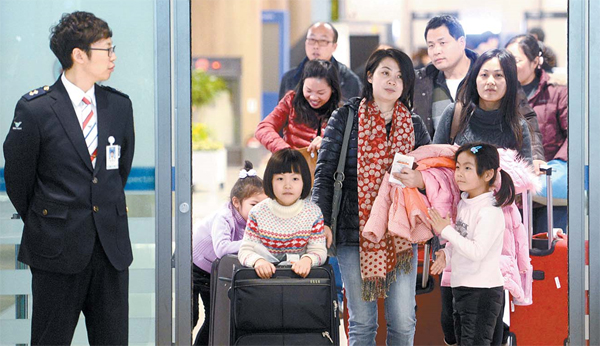 Families of inbound Chinese tourists arrive Tuesday at Incheon International Airport. For the first time, Chinese visitors to Korea surpassed Japanese in 2013, reaching a peak of 3.92 million; 1.2 million more than from Japan. [NEWSIS]

On a recent afternoon, large crowds of Chinese people swarmed through the middle of the Myeongdong area, central Seoul’s primary shopping district, with many toting fully stuffed shopping bags in both hands.

Overhead, a banner read “Happy New Year” in Chinese - part of a bid to appeal to this increasingly prevalent tourist demographic. These days, such a scene has become commonplace.

“The number of Chinese coming to Myeongdong has been gradually increasing, while the numbers of Japanese have shrunk,” observed Choi Chun-joo, a clothing store owner in the area.

Official data released Monday by the Ministry of Justice supports Choi’s assessment. For the first time in 52 years, Chinese visitors to Korea outnumbered the Japanese by 1.2 million in 2013, reaching a peak at 3.92 million. That figure accounts for 36.7 percent of the total of nearly 10.6 million foreigners who came to Korea last year. Tourists from Japan accounted for 25.4 percent, down 9.1 percent on the year, the ministry said. 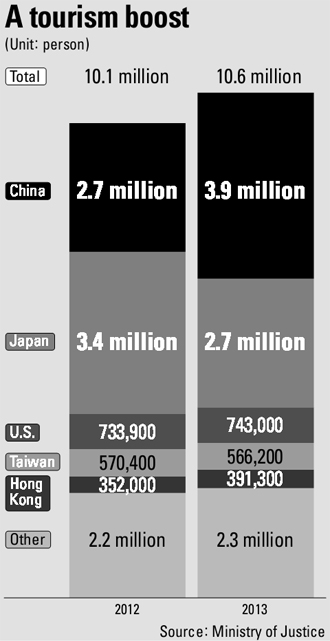 While the number of Chinese tourists to Korea increased by 43.6 percent in 2013 from a year earlier, the number of Japanese visitors shrank by 780,000 over the same period to 2.7 million. Officials have attributed this decline to the yen’s fall against the won in the aftermath of an expansionary monetary policy carried out by Japanese Prime Minister Shinzo Abe.

Korea’s reputation as a cosmetic surgery hub is thought to be one reason many Chinese residents are attracted to Seoul, in addition to its short distance from the mainland.

“I got plastic surgery last year at a clinic in Gangnam [in southern Seoul], and I am very satisfied with it,” said a 49-year-old tourist surnamed Wang, from Shanghai.

She added that she came here with her daughter this time so that she could also go under the knife.

Ye Lichao, 49, said he decided to come to Korea for the first time because of its proximity to Beijing and cheap travel fare.

Officials believe escalating tensions between China and Japan over historical and territorial disputes have persuaded many Chinese tourists to choose to travel to Seoul over Tokyo.

“The data shows that Chinese consumer power in Korea has already surpassed that of the Japanese,” said Park Dong-chul, an official at the Justice Ministry. Officials there expect more than 4 million people from China will visit the country this year.

In a testament to the fast-growing purchasing power of the Chinese, Shinsegae Department Store said its sales from Chinese customers increased by 87 percent last year from 2012, while Chinese tourists’ purchases at Lotte Department nearly doubled over the same period.