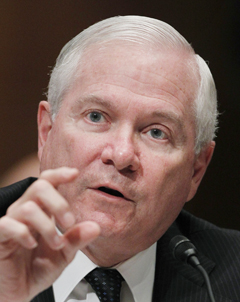 Former U.S. Defense Secretary Robert Gates’s description of the late President Roh Moo-hyun as “anti-American and probably a little crazy,” as written in his new memoir, is creating controversy in Korea.

In the memoir titled “Duty: Memoirs of a Secretary at War,” Gates professed his surprise that Roh, who was president from 2003-8, told him that the “biggest security threats in Asia were the United States and Japan.” Gates met Roh in Seoul in November 2007.

In comparison, Gates paints a more flattering picture of former President Lee Myung-bak, whom he said he “really liked,” calling him “tough-minded, realistic and very pro-American.”

Gates served as defense secretary from 2006-11 under President George W. Bush and President Barack Obama. He was also previously appointed director of central intelligence for Bush.

The memoir went on sale Tuesday. It recounts events following the sinking of the Cheonan warship in March 2010 that killed 46 sailors, which Seoul blames on North Korea and Pyongyang denies. It also refers to the North’s shelling of Yeonpyeong Island seven months later, which left two Marines and two civilians dead.

Gates described a meeting with Lee, who was president from 2008-13, as perhaps his “most important” during the Shangri-La Asia Security Summit in Singapore in June 2010, following the sinking of the Cheonan.

He writes that Lee was “adamant” there could be no return to the six-party talks - among the United States, China, Russia, Japan and the Koreas - until Pyongyang admitted and renounced their wrongdoing, adding that this was a viewpoint he agreed with.

The sinking of the Cheonan and the shelling of Yeonpyeong Island, Gates writes, “produced a change in attitude in the South” and a demand for stronger retaliation against Pyongyang.

Following the Yeonpyeong shelling, Gates writes, Seoul wanted to launch an air strike against North Korea on top of returning fire by artillery.

“South Korea’s original plans for retaliation were, we thought, disproportionately aggressive,” he writes, “involving both aircraft and artillery.”

Washington was “worried the exchanges could escalate dangerously,” he reports.

“Ultimately South Korea simply returned artillery fire on the location of the North Koreans’ batteries that had started the whole affair,” he writes. Washington and Seoul apparently discussed the issue over the phone for a couple of days.

He adds that there was “evidence the Chinese were also weighing in with the North’s leaders to wind down the situation.”

The Korean government did not immediately respond to Gates’s version of the events in 2010.

Gates recollects the significance of a trip to Seoul in July 2010 with Secretary of State Hillary Clinton to meet with their Korean counterparts for so-called two plus two meetings.

Gates writes that there was speculation the sinking of the Cheonan may have been the idea of heir-apparent Kim Jong-un to prove to the North Korean military “that he was tough enough to succeed his father.” It also suggested that “other provocations might be coming” thus “underscoring the strength of our alliance was very important.”

He also writes that his visit to the village of Panmunjom in the demilitarized zone during the same trip was memorable when “a very large, menacing North Korean soldier stood outside the window glaring at Hillary and me.”

He said he “resisted the temptation to go to the window and do something quite undiplomatic.”

The book has prompted controversy in Washington for its criticism of President Barack Obama’s leadership of the war in Afghanistan.

Critics such as Senator John McCain said Gates’s memoir should have been released at a later date.

The Korean public is responding sensitively to Gates’s description of late President Roh.

On Daum’s Agora forum, one user posted a message reading, “It’s amazing how someone can take such an arrogant stance and speak so informally of another country’s leader.”