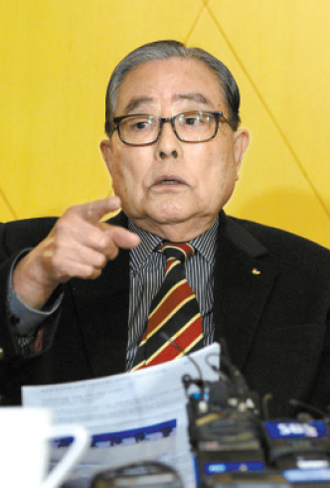 When the Korea Olympic Committee held a media day on Wednesday for the three Korean national skating teams - figure skating, speed skating and short track skating - to hear the athletes’ resolutions for next month’s Winter Olympics in Sochi, Russia, most of the skaters spoke cheerfully about their hopes.

Figure skater Kim Yu-na said she will enjoy the event as this is her second Olympic appearance, adding that her primary goal is to perform her program without making mistakes.

Speed skaters Lee Sang-hwa, the world record-holder in the women’s 500 meters, Mo Tae-bum, who won the men’s 500 meters in the 2010 Vancouver Olympics and Lee Seung-hoon, who won the men’s 10,000 meters in the same event, displayed their friendship. Mo said, “As you guys know, we have been good friends. We try to cheer each other up when someone has a slump and since we have been doing a fine job recently, we wished each other the best in Russia.”

But the friendly atmosphere disappeared when the short track skating team entered the conference room at the Taereung International Skating Rink in Seoul. When reporters asked coaches and athletes similar questions, their answers were identical.

“We are currently trying to concentrate on our training in order to make a successful outcome,” said Choi Kwang-bok, the team’s coach. The skaters, including Shim Suk-hee, a 16-year-old rising star in the women’s short track event, said the same thing.

In fact, the Korea Skating Union, which manages the skating teams, has been under fire since it was reported last week that one of the coaches of the women’s short track team was accused of sexually assaulting a female student when he was a coach at Korea National Sport University in 2012. The alleged victim didn’t sue the coach or seek to press charges.

The coach was neither investigated nor punished at the time of the alleged incident. Instead, sources said a high-ranking official of the union, who graduated from the same university as the coach, influenced the union to place the coach on the national team’s staff, adding that the official was aware of the alleged sexual assault.

After fans, the media and retired veteran athletes strongly criticized the union, the coach, who was set to participate in the Sochi Olympics, was removed from the national team on Jan. 9. He was also kicked out of the Taereung training camp. But the union hasn’t taken any action since then.

Because the scandal snowballed, the skating union later said, “The union didn’t know about the incident before we appointed the coach to the national team.” The union also said it will hold a committee meeting to punish him. The first meeting was held Sunday, but it ended without an outcome.

“That meeting is useless because the committee consists of high-ranking officials of the union,” an official of the Asia Skating Union told the Korea JoongAng Daily. “They won’t do anything and will keep quiet until the Olympics ends because they don’t want to bring this up to the public.”

On Tuesday, Jang Myung-hee, 82, president of the Asia Skating Union, and five other retired skaters, held a press conference at the Renaissance Hotel in Yeoksam-dong, southern Seoul, where they strongly criticized Kim Jae-yeol, 46, the head of the Korea Skating Union, and executive-level officials of the union.

“Morality is much more important than just winning medals in the Olympics,” Jang said. “In order to help our young players to make good outcomes in the future, we should correct wrong things. In the union, a few high-ranking officials are wielding their power in the wrong way. They forgive when people who blindly follow them do something wrong, and they just kick out people whom they don’t like from the union.”

Meanwhile, Noh Jin-kyu, 22, a rising star on the men’s short track team, will not be going to Russia. The union said on Tuesday that Noh injured his left elbow during training. He was scheduled to compete in the 5,000-meter relay in Sochi.

Korea Skating Union officials said it will replace Noh as soon as possible and told Jang, the ASU chief, to speak to them directly if he has any problems with them.