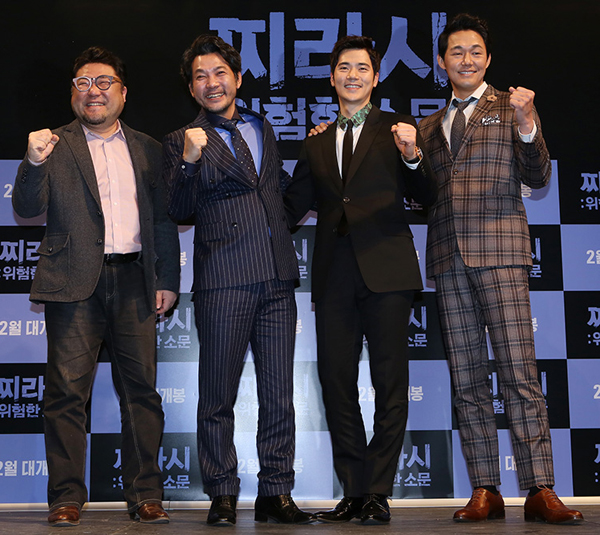 The celebrity rumor mill gets tackled head on by director Kim Kwang-sik in his new movie “Tabloid Truth,” which comes out next month.

Called “Jjirasi” in Korean, the title refers to the Japanese word chirashi, which means leaflet. In Korea, these days these online gossip rags have caused many headaches for the country’s celebrities and their management companies.

Kim Kang-woo, who plays the lead character of a manager who tries to get to the bottom of a rumor that caused his client to kill herself, said that he has been a reader of the controversial leaflets, too.

“I do get them sent to me and, sure, I’m interested and pore over every detail,” said Kim. “But because they talk about my peers, I don’t forward them.”

Jung Jin-young, who plays a man who circulates the jjirasi, said that, unlike his character, he was totally unaware of the leaflet culture.

“It was the first time I came across jjirasi,” said Jung who felt “uncomfortable” with the notion.

“Regardless of whether something is true or not, you’d feel horrible if you were the subject of the gossip.”

Go Chang-suk, who plays a wiretap specialist, said that his unsavory character grew on him over time. In addition to getting his nails painted black, Go said he got piercings for the movie. “I actually went to Hongdae myself to pick out the accessories,” he said, referring to the artsy neighborhood in western Seoul.

The filmmaker said that he was excited about tackling the taboo subject.

“Like everyone else, I’m curious about how they start, who circulates them and why,” said Kim.