Best time for reunification is now

Best time for reunification is now 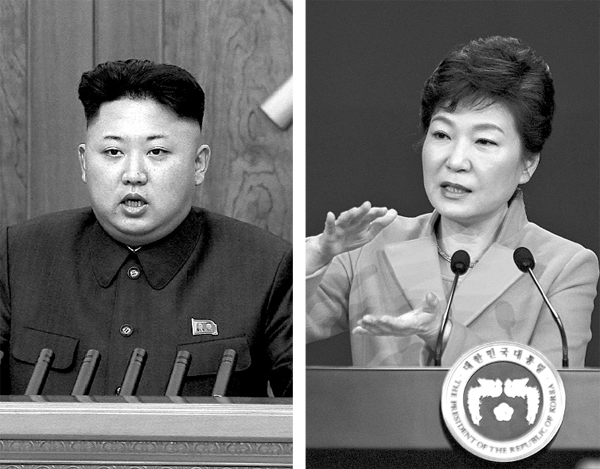 After North Korean leader Kim Jong-un, left, made a New Year’s speech, President Park Geun-hye had a press conference with Korean and foreign media on Jan. 6. She said reunification would be a “jackpot.” [JoongAng Ilbo]

At her New Year’s news conference, President Park Geun-hye said, “reunification is a jackpot” and declared that a new era of unification should be opened. It is quite inspiring since her comments are based on a precise understanding of the situation on the Korean Peninsula. After the statement, she made a timely decision to form a government-level “unification legislation consultative group.”

The Park administration is active in promoting reunification, but the politicians of the ruling and opposition parties as well as the intellectuals and general citizens show indifference to the issue.

Why are people reluctant about reunification? Many are concerned about the enormous expense of reunification and the chaos that would inevitably follow the process. Also, some oppose reunification by absorption, since absorbing the North into the South is the only way it could be accomplished at the moment.

However, we should not be indifferent. The cost of reunification is not an expense but an investment, and the post-unification confusion would be negligible compared to the suffering caused by the division and the benefits of unification.

Apparently, North Korean residents are suffering from starvation and fear in their country’s dictatorial and closed rule, and tens of thousands have defected already. Knowing the devastating situation so well, those opposing unification altogether should be criticized for aiding Kim Jong-un in the persecution of innocent people. Moreover, the claims by the so-called progressives show how backward their ideas can be.

More people feel indifferent or negative about reunification because of their skepticism over its possibility. Considering the current confrontation between the two Koreas, the division seems to be perpetual, and the four neighboring powers - China, Russia, Japan and America - have tremendous influence over the Korean Peninsula and do not want reunification.

China especially influences reunification, and yet it seems to consider North Korea to be a strategic buffer, so people feel that the realistic possibility of the Koreas reuniting is slim.

But is that point valid? Such a view is restricted by conventions. The intense standoff can actually accelerate reunification, and the four powers could want a unified Korea now that North Korea claims to have nuclear weapons.

The Kim Jong-un regime has developed nuclear weapons, refused to open and reform, and executed its reformist uncle Jang Song-thaek in order to maintain the divided system. But all of these elements could advance the collapse of the Kim regime and improve the conditions for reunification.

Moreover, China, which has played the as North Korea’s sponsor, will no longer assist the North Korean regime, and that change is a critical variable for reunification.

Pyongyang and Beijing are already not getting along because of the North’s nuclear weapons and refusal to reform and open, as well as the execution of the pro-Beijing reform-minded Jang, whose charges were accompanied by thinly veiled attacks on China. All together, they show Kim is prepared to part with China, so the possibility of China stopping its assistance to North Korea is growing. China cannot afford to leave the Kim Jong-un regime alone as there is a possibility of Pyongyang improving ties with the United States.

If China suspends its food and energy assistance, North Korea would barely last a few months. North Korea’s collapse may encourage China’s ambition, so Seoul needs to persuade Beijing that the reunification of the Korean Peninsula, initiated by the South, would be no loss for China but could actually help China’s national security and economic development.

The best timing for reunification has come. Considering the vulnerability of the Kim Jong-un regime and the attitudes of four powers toward North Korea, no better opportunity is likely to come along than now.

*The author is the president of the New Civilization Policy Institute.