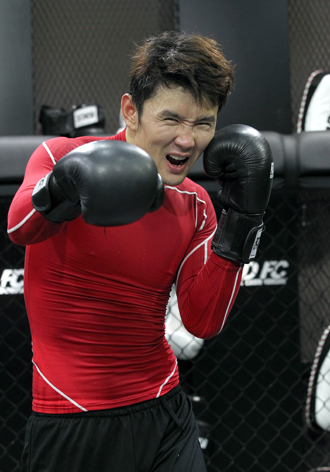 Comedian Yoon Hyung-bin has been fighting to make it as an entertainer for almost a decade. But now he is about to try something new: fighting for real.

Yoon shocked his fans when he announced he would try his hand (and presumably his feet) at mixed martial arts. His debut match on Feb. 9 in the Road Fighting Championship at Olympic Park, southeastern Seoul, is approaching fast, but the comedian said during a recent interview with Ilgan Sports, an affiliate of the Korea JoongAng Daily, that he is relaxed and ready.

“As I’ve set a date and an opponent, I feel more comfortable and can’t wait to show some good results from the match,” he said. He will be fighting Tsukuda Takaya, who is also a rookie fighter.

Q. How is your training going?

A. I started getting more hard-core with my training last week. I was training two or three times a week before, but now I’m doing it five times a week. Each training session lasts five hours now, up from the previous two. With this much training, I hope I can get a good result. Also, I’m trying to lose 10 kilograms [22 pounds] to make myself eligible for a lighter level.

Have you gotten any major injuries?

Not yet. Of course I get scratches and bruises here and there. Maybe it’s because I am not only inherently robust but am also getting the right tips from great teachers.

Have other celebrities supported you?

Many have told me to win. It feels good whenever I receive some encouragement.

Is your wife, comedian Jung Kyung-mi, worried about you?

I have told her so many times over the past eight years of our relationship that I would become an ultimate fighter some day. When I recently arranged my first fight, she called me 10 times that day and said she’s worried. She even called other fighters and asked if I’ll be okay or what food I need to eat. I consoled her by saying that ultimate fighting is a safer sport than people think.

Is there anything you are particularly worried about?

I’m afraid that people will think of me as a comedian, not a fighter. But I’m just going to focus on what this challenge means to me. If I were to get some benefits as a comedian, I would have not tried it, because there would be a lot to lose. I just want to enjoy the moment I face the fear. I want to tell people who don’t approve [of mixed martial arts] that they should try doing it themselves.

Speaking of being a comedian, you haven’t been on the KBS show “Gag Concert” since July. Have you decided to put your career as a comedian on hold?

I have been performing in a small theater in Busan on weekends. Because I love comedy so much, I’m not letting that passion go away. But this month, I won’t be performing as I want to focus on training.

I want to show the public some good and fun matches, like the ones that make you feel exhilarated, whether I win or lose.