Tattooists aim to remove stain from their craft

Tattooists aim to remove stain from their craft 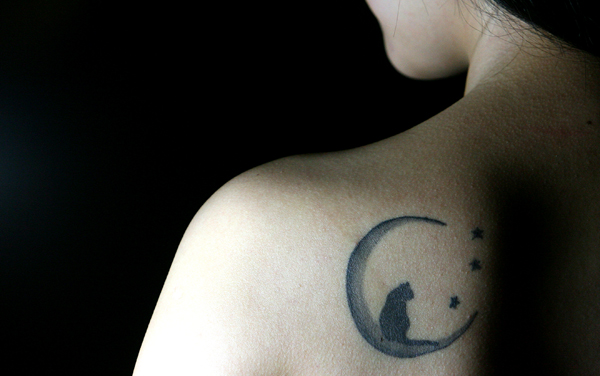 Trying to find a tattoo artist is almost like contacting Deep Throat. After punching in his phone number, the only response I got was a dry female voice saying, “The phone number you are trying to reach is unavailable.” However, when the number was saved, a name popped up on my KakaoTalk list. We set a time and date by messaging each other, and the tattoo artist gave me the address to his studio.

A few days later, I found myself standing in front of a five-story, shabby building in the dense neighborhood of Seongsan-dong, Mapo District, near World Cup Stadium. I had to double-check the address. It was an ordinary residential multi-unit building with no signboard, but the address was correct.

Inside, there was a musty odor and it was pitch black, even though it was in the middle of the day. At the end of the stairs, a surreal world opened up to me - I was standing in a spacious, artsy room decked out with leather couches, murals and stuffed birds, which serves as a studio to 34-year-old tattoo artist Sajin. As is the case with many tattooists, he only uses a nickname.

Sajin, who has been tattooing for eight years, is well known for his European-style tattoos with flamboyant colors and bold patterns. He is also often invited to do his work overseas. But he can’t hang up a signboard or advertise his career. His door is always locked and opened only to those who make a reservation in advance because in the eyes of Korean authorities, he is an outlaw. Licensed medical doctors are allowed to practice tattooing in Korea, but only a handful of dermatologists and plastic surgeons do so.

Sajin has never attempted to hide, but he and his fellow tattooists have no option but to operate behind closed doors. Ironically, however, the nation’s tattoo scene is growing constantly as tattoos are no longer considered to be the mark of criminals.

“As far as I know, there are about 1,000 tattoo artists near Hongik University alone. The number of tattoo parlors also has gone up sharply over the past few years,” said Sajin.

Another tattooer, who goes by the nickname Lee Rang, said, “Each building in Hongdae [an abbreviation for Hongik University], has one or two tattoo parlors inside.

“The tattoo culture is growing this fast, but everything is done under the [radar]. Thus, it keeps causing troubles as the law fails to keep up with reality,” Lee added. 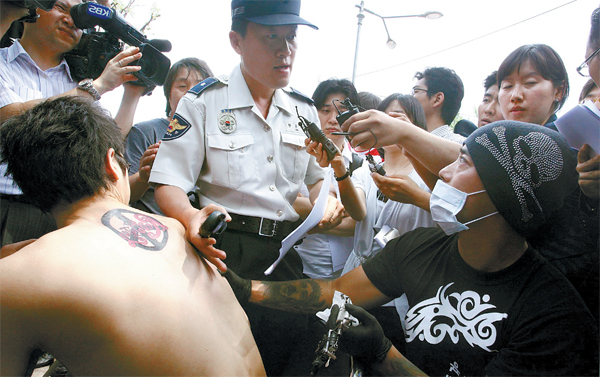 Tattooist Lee Rang, bottom right, has been campaigning to establish a licensing system for tattoo artists in Korea as well as hygiene standards for tattoo shops. Part of his campaign involves periodic tattoo performances, in which he applies tattoos in open spaces. [JoongAng Ilbo]

Sajin and Lee have experienced the ups and downs of Korea’s tattoo scene.

“In the early 2000s, I tried to cover my tattoos as much as I could. Otherwise, I had to put up with all the stares from strangers wherever I went,” said Sajin.

Getting a decent tattoo machine was also hard in the old days.

But he doesn’t hide his tattoos anymore. “People are not interested in my tattoos anymore - maybe because they aren’t something new to them,” said Sajin.

Part of the reason people, especially young people, became more tolerant of tattoos is because they see more inked celebrities.

Until a few years ago, tattoos were associated with criminals, and some juvenile delinquents made headlines by using their fully inked bodies to intimidate others, but tattoos are much more popular now.

G-Dragon, the leader of the boy group Big Bang, has tattoos on his back and both arms. On one arm, it says “too fast to live too young to die”; “vita dolce” and “moderato” are tattooed on his other. Hyun-A, a member of the girl group 4Minute, also has two tattoos: one on her upper back and another on the inside of her arm.

They’re just some of the inked celebrities.

As the market has grown, it has also become diversified.

“I had to draw all the tattoos, from typical gangster tattoos to cute little dolphins and stars, regardless of my specialty,” Sajin said. “With the market becoming more mature, each tattooist tries to pursue their own genre if they are not only after money.

“Many people are also well aware that they should go to this tattooist for traditional Japanese irezumi, or that tattoo parlor for tribal or old school,” said Sajin.

Irezumi, tribal and old school are different genres of tattoos.

At the same time, blogs and mobile messengers have enabled rookie tattooists to lure customers who have little knowledge of tattoos or people who are thinking of getting one - or more.

“Real masters simply don’t spend much of their time writing blog posts and answering questions about tattoos on Naver [the largest Web portal]. It is a newly created market for both customers and tattooists as the tattoo scene is getting bigger,” said Lee.

Tattoos used to be considered the mark of criminals in Korea, but not anymore. Many celebrities can now be seen sporting some ink, including, from left, footballer Cha Du-ri, actress Kong Hyo-jin, G-Dragon, the leader of the boy group Big Bang, and Hyun-A, a member of the girl group 4Minute. [JoongAng Ilbo]

Sajin gets paid for the work he loves and is content with his job for the most part, but he was also honest about feeling insecure.

“Whether you are artistically inclined or a tattooist who only seeks money, we are all outlaws, after all. It makes us feel insecure. That is one of the reasons many of us, especially all the good ones, leave the country.”

The country’s tattoo history is relatively short, only about 20 years or so, but in that time many Korean tattooists have made a name for themselves overseas, and some have tattooed foreigners while working as guest artists in Europe, Japan and other countries.

One of them is Yushi. He’s traveled all over the world, working as a judge at global tattoo conventions and winning awards at competitions. He also collaborates regularly with private companies such as Nike Korea.

But most tattoo artists and their customers are caught in the gap between reality and the health law.

Some customers abuse the law by getting tattoos, then they report the tattoo parlor to the police or refuse to pay, knowing that the tattooist has no recourse. Some tattooists recycle needles and don’t care about hygiene or apply tattoos to minors.

It’s also easy for anyone to buy a tattoo machine in Korea, and they are often used by teenagers. However, in countries where a licensing system exists, ordinary people without licenses can’t purchase such machines.

For these reasons, tattoo artists want their work to be legalized.

Efforts have been made, but they’ve been in vain. Since 2007, Democratic Party lawmaker Kim Choon-jin has been proposing a bill to establish a licensing system for tattoo artists as well as hygiene standards for tattoo shops. He proposed the bill again last month, but it has little support and isn’t expected to pass.

“It’s quite frustrating because we have these two giant unbeatable obstacles. One is the Ministry of Health and Welfare and the other is the medical circle,” said Lee. “But we’re willing to pay taxes, just like anyone else. You know, we all take cash and we can pay quite a lot of taxes. I want the government to see us as useful resources.”

Lee, a 40-year-old tattooist who set up an association for tattoo artists three years ago, has been campaigning for a national licensing system so that tattoo artists can work within the boundary of the law.

He’s been staging tattoo performances, and he did a campaign by himself in front of the Yasukuni Shrine in 2012, urging the Japanese government to apologize for forced labor and sexual slavery of Korean women during World War II.

“I have been raising my voice over the legalization of tattoo artists. But one day I realized I always ask for something from the government without doing anything for society. That’s why I began such campaigns and charitable activities,” he said.

Almost all tattoo artists agree that a national licensing system would solve their problems.

Even Kevin Paul, a British celebrity tattoo artist, says so. Last year, he initiated his “Tattoo Regulation 2013” campaign to push for more regulations in the U.K. tattoo scene.

“All the fans of my acts were sending me photos of their tattoos, and I was surprised to find out that those who were underage got it done around a friend’s house,” Paul wrote in an email interview when asked what made him launch such a campaign.

“I found this shocking and dangerous. I feel there should be a basic level of hygiene training, or people [tattooist hopefuls] need to spend at least one year under a professional artist.”

No support from Health Ministry

The primary reason the Ministry of Health and Welfare won’t permit a licensing system for tattoo artists is opposition from the medical sector. But Kwon Yong-hyun, a plastic surgeon who runs Bloom Clinic in Cheongdam-dong, southern Seoul, says doctors really don’t mind introducing such a system.

Kwon was one of Lee’s advisers when he launched his association for tattooists. Kwon was also a practicing tattooist until a few years ago, but he doesn’t do it anymore.

“There are tons of tattoo artists who are far better than me. There is no reason for me to do it anymore,” said Kwon.

Getting a tattoo from a tattoo parlor is safe, Kwon said. In fact, many tattoo shops use disposable needles and are also equipped with sterilizers.

“You don’t have to worry about side effects or hygienic issues. We don’t oppose the introduction of a licensing system, but it is the stance of the Health Ministry,” said Kwon.

Under the current health law, tattoos, cupping therapy and hand acupuncture are grouped as semi-medical practices that should only be done by licensed medical doctors.

If the Health Ministry gives approval to only the tattooists, then the ministry would have to deal with issues raised by other parties.

“For me, it seems silly that the government still sees that tattooing is similar to cupping therapy and hand acupuncture,” said Kwon.