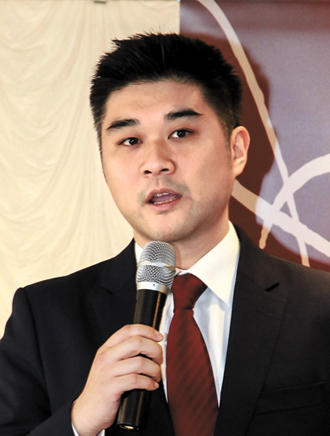 Tai Hui, managing director for the Asian market of JPMorgan Asset Management, said the weakening yen will not hurt Korean exports, adding that Korea will be one of the biggest benefactors of the global recovery this year.

“From my perspective, Korea is likely to benefit significantly from a growth environment in the U.S. and Europe,” the analyst said at his annual country press conference in Yeouido, western Seoul. “If you look at the performance of Korean exports in the second half of last year, although growth hasn’t much accelerated, we saw much a bigger contribution coming in from the U.S. and Europe, which hasn’t happened for some time.

“The relation between the Korean won and yen is important and it shouldn’t be underestimated, but what is more important in my view is the global growth environment,” said Hui, who is based in Hong Kong.

The analyst showed hard data to support his forecast concerning the impact of the won-yen rates on Korea’s exports.

“We did have a period where the Korean won was even stronger relative to the yen than now in the period between 2004 and 2008, but we saw even stronger Korean exports at the time.”

After 2008, the won weakened massively, yet it didn’t much help Japanese exporters, he explained.

“Not to downplay the role of the exchange rate, but what’s more important is the global demand for Korean exports that we believe will gradually pick up in 2014,” he added.

“We will see all of the major economies - the U.S., Europe, China and Japan - growing together for the first time since 2011,” he said.

Considering the recovery signs this year, the analyst recommended investors should be “more aggressive equities and selective in bonds.”

“With a better global macro environment, especially with the U.S. Federal Reserve reducing its bond purchases, investors should switch to equities and be more selective in bonds,” he said. As for Korean stocks and bonds, Hui advised looking at those of Korean exporters rather than domestic consumption-based stocks, since Korean exporters are expected to show stronger growth owing to the reviving U.S. and European markets.

“The Korean consumption story is fine, but more potential upside surprises will come from exporters - automakers and consumer electronics makers,” he said.