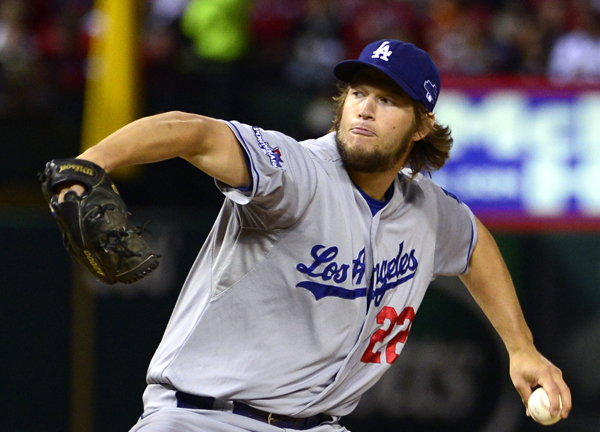 Pitcher Clayton Kershaw agreed Wednesday to a $215 million, seven-year contract with the Los Angeles Dodgers, a person familiar with the negotiations told the Associated Press, a deal which makes the two-time Cy Young Award winner baseball’s first player with a $30 million average salary.

The person spoke on condition of anonymity because the agreement had not yet been announced.

Kershaw receives the most lucrative deal for a pitcher, breaking the mark of $180 million set by Justin Verlander in March for his seven-year contract with the Detroit Tigers.

Kershaw would have been eligible for free agency after next season if the new deal hadn’t been reached. He was eligible for salary arbitration, and those figures were set to be exchanged Friday. He was coming off a two-year, $20 million deal that included $200,000 in bonuses in 2012, a $500,000 escalator to his 2013 base salary, and $300,000 in bonuses last year.

General manager Ned Colletti said last week that both sides had been negotiating.

“It’s our desire to sign him here for a very long time,” Colletti said.

The average salary of $30.7 million tops the previous high of $27.5 million, set by the New York Yankees’ Alex Rodriguez as part of a 10-year agreement in December 2007. While Roger Clemens had a contract with a listed salary of $28 million with the Yankees in 2007, he joined the team in June and actually made $17.4 million.

The Dodgers had baseball’s second-highest payroll at the end of the regular season last fall - more than $236 million.

Kershaw has been a powerful, yet low-key, presence on the team. In the offseason, the Dallas native has worked to build a charitable legacy alongside his wife, Ellen. The couple has made yearly trips to Africa, where his foundation that focuses on helping at-risk children built an orphanage.

The deal signifies further stability for a club that was in turmoil under former owner Frank McCourt, who sold the team to a group that includes Magic Johnson in 2012. The Dodgers signed manager Don Mattingly to a three-year deal last week and now have locked up their ace.

Last year, Kershaw pitched a career-high 259 innings between the regular season and the playoffs. The season ended on a sour note when he pitched a rare clunker in the Dodgers’ 9-0 loss to St. Louis in the NL championship series that eliminated them.

Still up for discussion this winter is a new deal for Hanley Ramirez, who hit a team-leading .345 and played hurt during the NLCS. He has one year left on his contract. AP