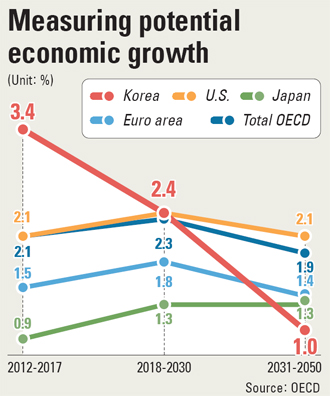 The Korea Chamber of Commerce and Industry warned yesterday that the Korean economy will remain trapped in a low-growth cycle without fundamental solutions to its structural defects.

Citing data released in May 2012 by the Organization for Economic Cooperation and Development, the business lobbying group said Korea’s potential economic growth rate will be 1 percent on average between 2031 and 2051. That puts Korea even lower than the estimated average potential grow rates for the U.S., Japan and many European countries for the same time frame.

The worrying caution came after President Park Geun-hye started the year by laying out the ambitious 474 blue print - 4 percent GDP growth, 70 percent employment and $40,000 per capita income - as part of a 3-year economic innovation plan.

The KCCI said the mushrooming of household debt will contribute to lowering Korea’s potential growth by choking private consumption, a key to revitalizing sagging domestic demand. It also mentioned as slowing factors a saturation of key export industries in Korea, the country’s low birth rate and the rapid aging of its population.

The Korea Development Institute, the leading state-run think tank, is also predicting that Korea’s potential growth rate will tumble below 3 percent in 2020 and 2 percent in 2030 for the same reasons.

“The potential economic growth rate is falling at a faster pace that the income growth rate … but the forces exerting downward pressure are structural ones, so it is not easy to escape the trap of low-growth,” said the KCCI.

The chamber said Korea’s low-growth trend is forcing it into an uncomfortable position in which it is increasingly squeezed between the recovering economies of advanced countries and emerging economies that are quickly catching up. The Korean economy’s contribution to worldwide gross domestic product edged up to 1.9 percent last year from 1.8 percent in 2000. But the contribution of emerging economies jumped from 37 percent to 50.4 percent during the same time period, the KCCI said.

The KCCI suggested the nation try to bring its business practices and education up to par with those of advanced countries. It also called for its companies to strengthen their fundamental competitiveness.