Posco picks CEO from own ranks

Posco picks CEO from own ranks 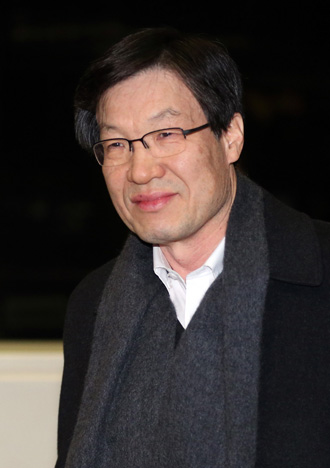 Posco yesterday said officials at a board meeting chose Kwon as the sole candidate for Posco’s next chairman and CEO. Kwon will succeed Chung Joon-yang, who offered to resign in November, after he gets approval from a shareholders’ meeting on March 14.

A CEO candidate recommendation committee, comprised of six outside directors, was formed immediately after a temporary board meeting on Wednesday, to conduct a screening process. The five candidates had interviews lasting 30 to 40 minutes each. Only Kwon and Posco Engineering and Construction Vice Chairman and CEO Chung Dong-hwa were asked to undergo additional one-hour interviews yesterday morning.

Posco said the candidates were screened in eight areas including leadership skills, vision and achievements. Kwon was chosen unanimously by the board to become Posco’s eighth chairman and CEO.

“If I am appointed chairman at the shareholders meeting, I will make Posco the company with the world’s highest competitiveness, with the help of all Posco employees,” Kwon said in a press release. “I will put in my best efforts for Posco to strengthen its status as a company that can best contribute to the nation’s economic development and a company that Koreans can be proud of.”

The 64-year-old from Yeongju, North Gyeongsang, joined Posco Research Institute of Industrial Science and Technology (Rist) and eventually became its head. He became Posco’s CTO and president in 2012.

The company said it was impressed by Kwon’s vision to raise Posco’s competitiveness by mixing his specialty, which is technology, with marketing.

“We picked Kwon because we decided he was the right one to lead Posco Group’s management through innovation,” said Lee Young-sun, chairman of Posco’s board of directors, who was on the CEO candidate recommendation committee. “Through the fusion of technology and marketing, he will reinforce the company’s original competitiveness in steel and foster the company’s long term growth by developing unique technology.”

The committee was also impressed by Kwon’s global networking, which he gained while studying in North America and working as general manager of Posco’s European Union office in Germany.

Lee said Kwon emphasized in his interview that he learned about restructuring processes among European steelmakers when he was in the European office.

However, critics are worried that Kwon is predominantly a researcher rather than businessman and the CEO needs to oversee all realms of Korea’s sixth-largest conglomerate, which also has affiliates operating construction and energy businesses.

Others are worried that Posco once again promoted an insider rather than bringing in some “fresh air.” Among the five men on the shortlist, only Korea Trade-Investment Promotion Agency (Kotra) President Oh Young-ho was from outside Posco.

Other critics claim Kwon may not be free from his predecessor Chung’s power, because he and Chung went to the same high school and university.

Chung led Posco through aggressively developing its resources and bulking up its size, and analysts are already predicting that the tone of his management will continue under Kwon.

Even though Posco was privatized in 2000, the company history shows that the steelmaker’s usually gets a new leader following a change in the Korean presidency.

“Many names were flying around during Posco’s CEO selection, and Kwon was more of outsider because he kept a distance from the political world,” an executive from Posco said.

Kwon’s main task will be raising the profitability of Posco and finding future growth, according to Posco board Chairman Lee.

“Because of oversupply and saturation in the materials market, not only Posco but the entire steel industry is facing margin squeezes,” Lee said. “In such a situation an individual needs to step up to actively push reform of Posco’s business structure to strengthen its financial stability and raise the group’s value for the future.”

Posco’s growth has been sliding since 2010. The group’s operating profit ratio has plunged from 11.6 percent in 2010 to 5 percent as of the third quarter of last year.

Although, overall performance of 2013 has not been announced yet, analysts speculate that Posco will report sales of 61.4 trillion won ($57 billion), 4 percent down from a year ago and operating profit that has slipped 14 percent year-on-year to 3.1 trillion won.

“For this year, the steel industry is expected to be better than last year, but still it will not make a dramatic improvement,” said Kang Tae-hyun, an analyst at E-Trade Securities. “Although the new chairman is not an expert in finance, he should be prepared to enhance the group’s profitability.”