‘The Dinner’ feasts on trials of an average family

‘The Dinner’ feasts on trials of an average family 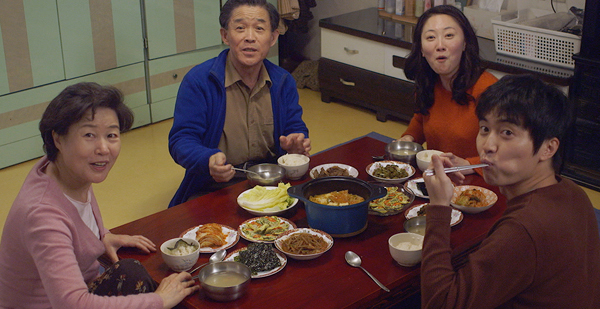 As the closing selection for the 18th Busan International Film Festival last October, “The Dinner” was feted for being the first Korean indie film to be selected for the prestigious slot by Asia’s biggest cinema event.

But despite the independent label, the movie was a fitting choice because it is a quintessential Korean drama about a family that is as average as they come.

Set against the harsh reality of the present economic situation at home, “The Dinner” is a detailed account of how a family somehow manages to keep it together despite a lack of money, relationship breakdowns and the sheer uncertainty that life brings.

With aged parents who depend on their children, an autistic grandchild and three siblings all with problems of their own, there is not a hint of glamor to this family.

Critics have drawn comparisons to the Korean classic “Aimless Bullet” in its brutal honesty. There is hardly anything comical about the story and the dialogue, except for the ironies of life.

At a press conference for the film on Jan. 10, director Kim Dong-hyun said that he wanted to address the problems and anxieties felt by his countrymen, much as Yoo Hyun-mok did in 1960 with “Aimless Bullet.”

“Before I am a director, I’m foremost a middle-aged Korean male,” said Kim. “We have been through some tough times economically as of late, and I was affected by it, as everyone else. This [movie] is my response.”

Having made a name for himself with “A Shark” in 2005 and “Hello, Stranger” in 2007, Kim said that once he had the idea for “The Dinner,” the story practically wrote itself.

“I woke up one day with the whole scenario in my head,” he said of the 125-minute feature, which examines the highs and lows experienced by a family as it battles unemployment, the recession, single-parenthood and other troubles.

Although essentially a tale about the interconnectedness of a family, the story centers on the eldest son In-chul (Jung Eui-gap).

Kim said this wasn’t intentional but rather a natural evolution as he crafted the film.

“It was only during editing that I realized how much of the movie was about In-chul,” said Kim.

And as a firstborn child himself, Jung said he could relate a lot to his character. But like the fate of the character he plays, Jung said the road to getting cast wasn’t easy.

“I actually failed the audition the first time,” he said, adding that it did not bother him much at the time because he was not sure about the project initially.

“When I got to the production company for the audition, I was like, ‘This place is tiny.’ I didn’t think they could make a movie there, and I wasn’t that fazed when I didn’t get the part.”

But when he got a call later from the director, and after reading the scenario properly, Jung changed his mind.

“I thought the script had more quality than any commercial film,” said Jung.

Not only did the film change character in the editing room, so did its title.

“It was going to be called ‘Mum’s Hamburger,’” said Kim, linking it to the scene in the movie when the mother gets her first taste of a hamburger.

“But during editing I realized that the scene where the family had their last meal together had become more meaningful, so we changed the title, too.

“I saw that scene as a sort of moment of reminiscing, but some interpret it as a sort of dream,” said Kim of the dinner scene, adding that he won’t feel bad if the audience chooses a different interpretation of what it all means.

“You never know when you are making the movie how it’s going to be received until you start editing,” Kim said of the uncertainty of the process.

And although some who saw the movie at the closing of the Busan festival were baffled by the ending, Kim said that the ending made sense to him.

“I think an ending should always be open-ended,” he said. “It’s both sad and optimistic at the same time.”