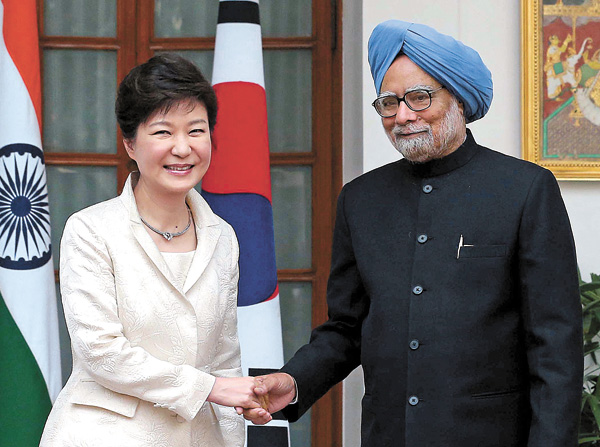 The two leaders released a joint statement following a welcome celebration and a summit at New Delhi’s Hyderabad House. They agreed to boost diplomatic, economic and defense cooperation to expand and deepen the countries’ strategic partnership.

They pledged to revise the Korea-India Comprehensive Economic Partnership Agreement (CEPA), a free-trade pact first signed in 2009 that went to effect the following year. Korea and India plan to broaden the scope of the CEPA to cover up to 90 percent of tariff lines, up from the current 75 percent.

“The two leaders reaffirmed the need to increase trade in goods and services and investment through the upgrading of the CEPA,” said the joint statement, “and agreed to make every effort to complete the process at the earliest.”

In an attempt to lower the taxes charged to Indian and Korean companies working in each other’s countries, the two sides agreed to revise a tax treaty to avoid double taxation as well.

The two leaders also expressed hope that steel giant Posco will be able to commence work on a large steel project in India at an early date.

Ahead of the summit, the Blue House released a statement saying Posco is expected to resume the long-delayed construction of a $12 billion steel plant in India following Park’s summit. The steel plant may begin production as early as 2020.

In 2005, Posco signed a memorandum of understanding with the state of Odisha in eastern India to build a steel mill. It was the largest foreign direct investment in India’s history, but local regulations and protests have stalled the project. The acquisition of land, environmental clearances and other validations will enable the resumption of the project, which Korea expects will employ 18,000 people.

Prime Minister Singh said he “welcomes the prospects of Korean companies participating in infrastructure building projects in India, such as electric power plants and railways construction.”

The leaders also spoke of boosting science, ICT, space and educational cooperation between India and Korea.

In her talks, Park conveyed to Singh her vision of “trustpolitik” on the Korean Peninsula and her aim for a Northeast Asia Peace Initiative.

During the summit, Korea and India also signed various memorandums of understanding such as on cultural exchanges between 2014 and 17 and an agreement to share classified military information.

Koreans will also be able to receive a single-entry 30-day tourist visa when arriving at an Indian airport.

Park, accompanied by a 70-member business delegation, arrived in India for the four-day visit on Wednesday. She met with over 180 Korean residents, whom she hailed for playing the most vital role in increasing economic cooperation between the two countries. Some 2,500 Koreans reside in India.

India and Korea celebrate the 41st anniversary of the establishment of diplomatic relations this year and are the third- and fourth-largest economies in Asia, respectively.

Bilateral trade was around $17 billion last year and is in Korea’s favor.

India, with over 1.2 billion people, is the world’s second-largest market by population.

Former President Lee Myung-bak visited India in 2010 as the guest of honor during Korea’s Republic Day celebrations, where the two countries’ relations were elevated to the level of a strategic partnership.