University of Hong Kong Professor John A. Spinks holds the school’s first admissions presentation in Korea on Tuesday at the COEX Convention Center in southern Seoul. Some 300 Korean students attend the university, a leading Asian institute that was ranked No. 2 in Asia in 2013, and No. 26 in the world, according to QS World University Rankings. By Kim Jong-taek

More Korean university students are choosing to study abroad in Hong Kong and Singapore, according to the Ministry of Education, with many considering these destinations cheaper, more competitive alternatives to popular exchange programs in the United States, Europe and Australia.

Universities in both countries have experienced modest gains in international students from Korea in the past few years and hope to perpetuate that trajectory.

To this end, the University of Hong Kong (HKU) held its first admissions conference in Seoul on Tuesday, part of the school’s bid to attract more Korean students and address the emerging trend.

A conference room at the COEX Convention Center was swarming with people that afternoon, with hawk-eyed parents and teens listening intently to commentary from an HKU admissions officer.

Professor John A. Spinks, who directs admissions and is the senior adviser to the vice-chancellor of the university, listed off the advantages to studying in the city, one of the biggest financial hubs in Asia, making sure to note the school’s high employment rate and generous scholarship opportunities.

“Compared to the tuition fees paid by students, the amount the university invests in education is higher,” he said, “but we have come to attract students to raise the competitiveness of the university and the city.” 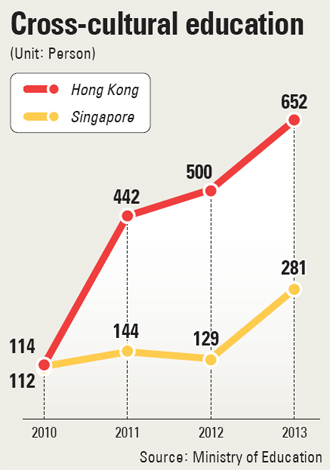 Six representatives, four professors and two admissions officers came to speak on behalf of the university. Spinks took questions from the students and parents and explained the admissions process, which takes into account Toefl scores, high school report cards and admissions essays.

“My desire to study at the University of Hong Kong increased [after talking to the school’s admissions officers that day],” said Koh Sung-joon, a student from the Korean Minjok Leadership Academy in Gangwon.

The 18-year-old said he decided to attend the conference after HKU sent an invitation to his high school.

Following the global financial crisis, there was an overall decline in the number of students studying abroad each year.

Approximately 252,000 Korean students went overseas in 2010, according to the Ministry of Education, while that figure decreased to 227,000 last year.

In contrast, students choosing to study in Hong Kong have gone up almost sixfold since 2010. In that year, there were 114 students studying in Hong Kong. That figure increased to 442 the following year, while last year about 652 students went to Hong Kong.

“After the 2008 global financial crisis, the attractiveness of U.S. colleges declined,” said Jeon In-sik, an official at the Korean Consulate General in Hong Kong.

“Once the Korean media started printing the world rankings of the universities in Hong Kong, we started receiving a lot more inquiries [about studying there].”

“I was weighing the option of studying in the United States, but I decided on HKU,” said Lee Min-ha, 20, an HKU freshman from Korea.

Lee Ji-su, another 20-year-old HKU student, said many students favor HKU because of its “affordable annual tuition rates, which range from 6 to 7 million won [$5,630 to $6,570]” and because its “employment rate is high [at 99.8 percent] in the midst of the Chinese economy’s rapid growth.”

More than half of the Korean students at HKU land jobs with companies in Hong Kong after graduation, according to the school.

Meanwhile, Singapore also experienced modest gains in its international student base. The increase in the number of Koreans studying there is slightly smaller, but grew from 112 in 2010, to 281 last year.

“You can learn Chinese and English simultaneously,” said Lee Jin, head of Shinseki Uhak, a study abroad counseling agency, “and with the exception of the National University of Singapore, the admissions process is not complicated.

“However, Hong Kong and Singaporean universities have high standards for graduation, so students have to consider carefully when selecting them.”