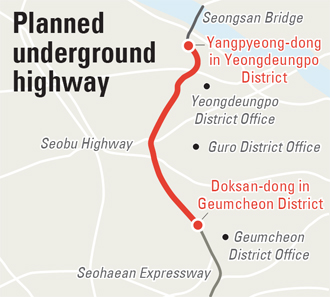 The Seoul city government yesterday announced that it will transform a congested main drive into an underground road by 2018 in a bid to ease traffic congestion.

The 10.3-kilometer (6.4-mile) section of the Seobu Highway - a major arterial road that connects Geumcheon IC in northern Seoul and Seongsan Bridge in western Seoul - will undergo construction in the last half of this year, with 528 billion won ($496 million) allotted for the underground transit network.

The section leads into the Seohaean Expressway, which connects Seoul to Dangjin, Gunsan and Mokpo, and is known for serious traffic jams.

Severe traffic jams are an issue for several urban arterial roads, with cars often piling up on roadways that link collector roads to freeways or expressways.

The Seoul Metropolitan Government said that the plan will significantly contribute to a reduction in traffic congestion, bringing an estimated 50,000 vehicles per day into the underground road.

The new road will be equipped with four lanes, while the current road above will be refurbished to include parks and recreational areas for the community.

The road is currently designated for vehicles only, but with the completion of the new road, the area above will be turned into a more pedestrian-friendly passenger road.

The city government will entrust private entities to construct and operate the system. In 2010, a Hyundai Engineering and Construction-led consortium was tapped as the preferred contender to build the new tunnel.

Seoul Mayor Park Won-soon has previously expressed his disapproval of private companies’ involvement in the public transit system. However, the city government went ahead with its initial plan to invite them.

Observers believe the decision stems from concerns over potential budget shortfalls this year. With the introduction of the government’s free day care program, the city government had to set aside more than 1 trillion won for the entire welfare budget, a 30 percent increase compared to last year.

Tensions between the city government and the private operator of a public transit system were highlighted when the consortium of subway line No. 9 unilaterally decided to increase fares from 1,050 won to 1,550 won in 2012, without first consulting the municipal office.

The decision to raise fares was met with an immediate public outcry, prompting the Seoul Metropolitan Government to step in.