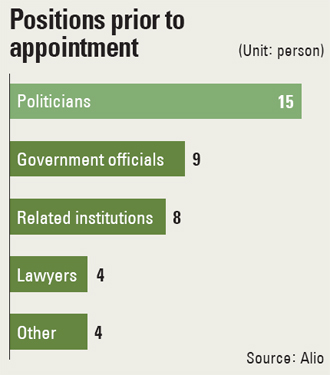 According to a survey by the JoongAng Ilbo, a new trend in “parachute appointments,” or revolving-door appointments, has emerged, with former politicians being the candidates of choice to lead major public companies.

This shift comes just several months after the administration of President Park Geun-hye and the Ministry of Strategy and Finance announced plans to crack down on state-run companies, pledging to curb parachute appointments and implement stronger measures to lower executive wages and curb employee benefits - widely considered to be contributing factors to company debt.

To that end, Prime Minister Hyun Oh-seok held a luncheon in November with the heads of 25 major state-run companies and organizations, in which he reprimanded them over corruption and lax business practices.

“The party is over,” Hyun emphasized at the luncheon. “It is time for us to face the cold truth and focus all our efforts on reducing these monetary risks.”

But just two months after the minister’s remarks, 15 out of 40 newly nominated executives at public companies were found to be politicians from the ruling Saenuri Party.

And nine of them were government officials at major branches of corporations, rekindling the old criticism that parachute appointments are unavoidable among government administrations.

Kim Won-duck, the new CEO of Korea Construction Management Corp., who took office on Jan. 10, served as a vice spokesman for the Saenuri Party. Kim’s specialty is politics - a far cry from the civil engineering and architecture expertise needed to run those business-focused areas of the corporation.

He was recommended by Korea Expressway Corp., its largest shareholder. Coincidentally, Kim previously worked with Korea Expressway CEO Kim Hak-song, also from the Saenuri Party. However, the two denied that they had a relationship.

According to a survey by the JoongAng Ilbo of 295 public corporations, 37.5 percent of 40 newly nominated heads or managers of public institutions were politicians. Before November, there were only five former politicians who were appointed.

One of the new CEOs, Kim Seong-heo, was previously a member of the former Grand National Party. He is now the president of the Korea District Heating Corp.

Internal auditor positions also appear to be dominated by former politicians as well.

In the meantime, there was only one CEO who was promoted internally, and another one who had previous experience working for other private companies.

Before November, politicians accounted for a mere 4.2 percent of parachute appointments at public institutions.

In the early days of the Park administration, those with no prior political experience were nominated as CEOs of public institutions, in line with the president’s vow to eradicate revolving-door appointments.

But that didn’t last long due to growing criticism over the close relationship between the government and public corporations.

Former senior officials from the Ministry of Strategy and Finance, who took key positions at public financial corporations, were even referred to as a “mofia.”

Though since then, about 38 percent of 120 key posts of public entities have been filled by current government officials at major ministries.

Parachute appointments of government officials are of particular concern because ministries have control over these corporations’ affiliated public institutions, especially in regard to budget, personnel and businesses.

In some cases, powerful government officials are even welcomed by these institutes.

The Ministry of Land, Infrastructure and Transport, which has 33 affiliated institutions, is infamous for its annual parachute appointments. About 20 high-ranking officials from the Land Ministry are dispatched to these entities each year.

Likewise, Korea Hydro and Nuclear Power Corp. appeared to favor parachute appointments from the Ministry of Trade, Industry and Energy, which led to a massive corruption scandal last year across the nuclear industry.

A few current politicians have even made their way into public companies, and parachute appointments have spread among the private sector as well.

The JoongAng Ilbo survey found that 18 out of the 86 key posts in public institutions were filled by analysts or experts who were operating in the private sector but employed by President Park’s election campaign team.

Choi Kyoung-soo, CEO of Korea Exchange, and Choi Yeon-hye, CEO of Korea Railroad Corporation are two examples. They both worked on Park’s campaign.

Choi, of Korea Exchange, served as the CEO of Hyundai Securities. And Choi Yeon-hye was the vice president of the company. While their experience has not been questioned, the process surrounding their appointments caused controversy.

The practice of parachute appointment has caused problems in regard to lax management - an issue the Park government pledged to crack down on.

Prime Minister Hyun, who is also in charge of economic affairs, said in a recent televised interview that “those who are branded as ‘parachutes’ will receive good assessments if they make good performances.”

The minister added that the government will focus on tangible achievements by September and warned that those who failed to meet government guidelines will be sacked.

Experts point out that the current way of filling the top posts in public institutions goes against the administration’s promise to reform the country’s public sector and ultimately creates inefficiency.

Whether improvements will be made has yet to be seen.

“The government’s efforts to normalize the public sector can only be realized when it boosts free competition among talented figures to enter the public arena,” said Moon Jong-jin, a business administration professor at Myongji University.

As for the government’s evaluation of public institutions, experts demand a stronger system that can hold those who were involved in parachute nominations responsible.

Lee Chang-won, a public administration professor at Hansung University, argued that the government should disclose the names of those who recommended failed CEOs.

“Even the names of related ministers and Blue House officials,” the professor added.