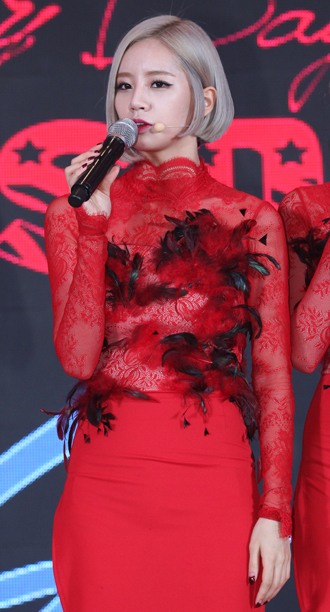 Lee Hye-ri of the group Girl’s Day is recovering after she fainted on Thursday, shortly after she performed on the music show “M Countdown” on cable channel Mnet.

“I’m okay!” she wrote on her Twitter page. “Sorry I made you worried.”

She checked out of hospital and returned home, said an official at her agency, Dream Tea Entertainment, yesterday.

“Her condition is much better than the day before, as her fever is gone,” the official said.

“However, we will continue to check her condition and, as she is sleeping, we will take her back to the hospital for another checkup.”

She collapsed on Thursday after performing to the group’s new song “Something.”

Since the group released the single early this month, it has been sitting near the top of the charts, including on local music shows on the three terrestrial channels KBS, MBC and SBS.