Boy band Exo, who won the grand prize at the 2014 Golden Disk Awards on Thursday, performs on stage at the event. [JoongAng Ilbo]

Held at Kyung Hee University, the event handed out prizes to 31 winners in 13 categories. But the top awards of the night were best album by physical sales and best online sales and streaming. Psy took the online prize home, while Exo won for their first full-length and huge-selling album.

Started in 1986 by Ilgan Sports, an affiliate of the Korea JoongAng Daily, the Golden Disk Awards are the only music awards judged solely on sales and streaming data.

Back in Korea after stints in Osaka, Japan, and Kuala Lumpur, Malaysia, the awards enjoyed one of their strongest celebrity turnouts in years. For more than four hours, many rising K-pop stars presented their music and honored the biggest hits of the year.

No one doubted that Exo would get the highest honor for physical sales this year, after the group’s “XOXO (Kiss & Hug)” sold more than 1 million copies last year - the first Korean album in more than a decade to reach that mark.

“XOXO (Kiss & Hug)” was released in two versions last year, the first in June and then a slightly different version in August.

“Such a record is unbelievable,” said Chan-yeol, a member of the group, to Ilgan Sports.

“Those numbers make me think about how we were loved so much, and that we need to focus and work harder to get better.”

The group, which won the best rookie award last year, spent 2013 adding to its success.

“It is a great honor to get the highest prize after being the best rookie last year,” said the team’s leader, Su-ho. “I know what this prize means, so I won’t forget the love you have shown and try to present you with something new.”

Another member, Kai, said that he was looking forward to presenting the group’s first solo concerts in 2014.

“We still have a lot more goals to achieve,” he said. “We want to become the artist that represents all Asia.” 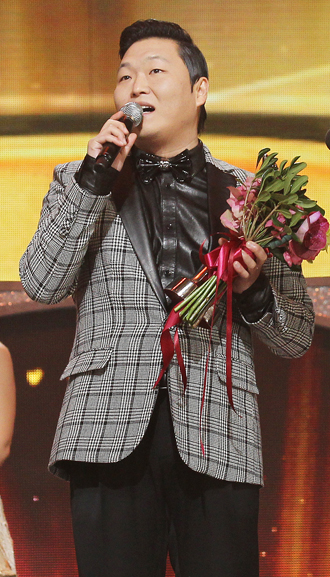 Psy thanks fans after receiving a grand prize for online sales and streaming.

A star continues to shine

Although Psy had a relatively quiet year in 2013, releasing only the dance song “Gentleman” as he worked on his next album, that song charted all over the world and was once again the biggest YouTube hit of the year, with more than 600 million views.

Psy made a surprise appearance on Thursday to pick up his award, one year after winning the same prize for “Gangnam Style.”

“I don’t think that many singers have been honored in two consecutive years, so I’m honored and thankful to be one of them,” Psy told Ilgan Sports after receiving the award. He said he was particularly happy his schedule allowed him to attend this year, after missing the show in 2013. “I really wanted to receive the award in person last year,” he said.

For the fans waiting to see if he can create another global sensation in the near future, Psy shared a little information about his new album, saying it is is almost complete.

“I should be able to show you some fun songs soon,” he said.

Snoop Dogg has been in Korea recently, reportedly working on a music video for Psy’s new single.

In addition to the big two prizes, 11 other awards were handed out, many to multiple winners.

Both online and physical sales also had several secondary, or main prize, winners.

And there were prizes given out in such categories as best rookie, most popular and best producer.

Boy band SHINee won the most awards, getting the Ceci Asia Icon award in the online sales and streaming category, and main prize and rookie awards in physical sales.

Girls’ Generation also won one award in both the physical and online categories.

While most of the winners on Thursday night were young acts, three veterans also picked up prizes.

Cho Yong-pil, a 64-year-old singer, enjoyed a big comeback last year thanks to his song “Bounce” and his 19th album, “Hello.” “Hello” sold more than 250,000 copies, making it one of the biggest of the year.

Cho was so successful in the 1980s that in 1986, after he won the very first Golden Disk grand prize, he declared that he would not take part in any award ceremony again. However, in appreciation of receiving a main prize this year, Cho did record a video message to deliver his appreciation.

“My dream is to be remembered for long time,” said Cho.

“Presenting good songs to you will be one way to pay back your great love, and I’ll continue putting forth my best efforts.”

Another veteran singer, Lee Seung-chul, who returned to the music scene with his 11th album in June, also received a main prize in the online section for his song “My Love.” 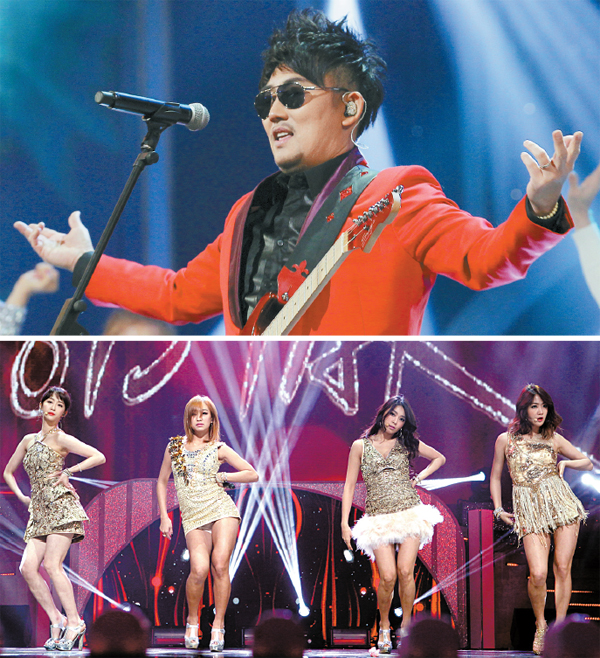 Following accusations of unfairness and shady dealings at many awards shows over the years, the organizing committee for the Golden Disk Awards put fairness at the top of its agenda for this event. Winners were chosen solely based on sales and streaming made between Jan. 1 and Dec. 31 of last year. Only albums with five new tracks qualified for the physical sales category, which excluded many EPs and TV program soundtracks. Sales data was collected through major album distributors and large and small retailers.

That same kind of meticulousness applied to its judging of online sales and streaming, using data from the Gaon chart, Bugs, Naver Music and others to figure out what songs were streamed and downloaded the most.