Hyundai and Kia still king of the road

Hyundai and Kia still king of the road 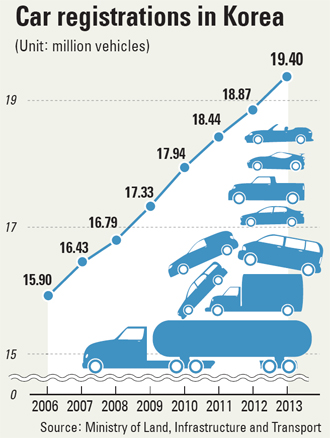 Hyundai Motor and Kia Motors vehicles account for more than 75 percent of cars registered in Korea, although their market share is being challenged by imports, especially German brands.

According to data from the Ministry of Land, Infrastructure and Transport on Thursday, 19.4 million vehicles were registered as of Dec. 31, up 2.8 percent from 2012.

The Transport Ministry expects car registrations to pass 20 million vehicles in the first half of next year. For 2013, registrations in the government database, which includes used cars, increased by 530,000.

Hyundai’s Sonata midsize sedan (1.64 million) and Avante compact (1.4 million) are the most popular cars, and among the top 10, eight are Hyundai or Kia.

However, ministry data shows Hyundai-Kia dominance may have peaked, as sales of imports are rising.

So far, 901,614 registered vehicles were made outside Korea, and 166,209 new registrations last year were foreign cars.

GM Korea and Ssangyong Motor were the only two local automakers to see an increase in new registrations.

Meanwhile, the ministry said there were more than 3.3 million car ownership changes in 2013, which includes used car sales and donations, up 2.8 percent from a year ago.

Last year, there were 1.02 million cases involving cancellations of vehicle registrations, which usually occurs when scrapping a car, down 7.8 percent from 2012.

The ministry speculated that because of the sluggish economy and enhanced durability of newer cars, many Koreans were simply hanging onto their rides.