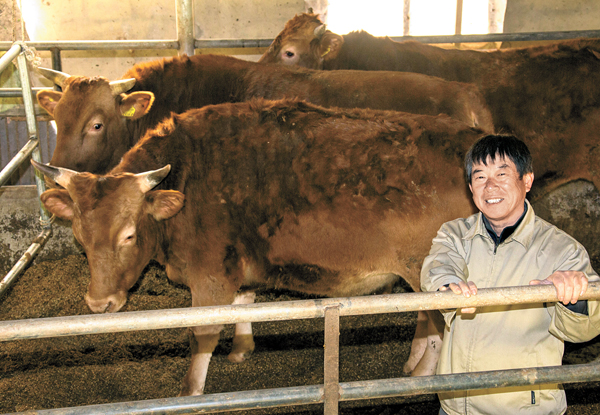 Kim Chun-man, 62, stands next to his cows. He breeds large and expensive cattle with his own recipe of mixed feeds. He also pumps water for the cows from 60 meters (196 feet) below ground. “Water constitutes 70 percent of their lean meat, so the quality of water for the cows makes a difference,” he said. By Oh Jong-chan

Kim Chun-man, 62, headed a small company in Gwangju that produced light bulbs before his life took an unexpected yet fortuitous turn.

When his business started to slump following the 1997 Asian financial crisis, he decided to close it down and relocate to Goheung, South Jeolla, where three of his brothers-in-law ran a cattle farm breeding native Korean cows.

From 2002, Kim worked the land, doing chores, learning about day-to-day operations and gaining first-hand experience in the industry. He built up a base of knowledge, familiarizing himself with cattle production and the basics of good-quality feeds.

Kim eventually started his own farm three years later, about 10 kilometers (6.2 miles) down the road from his relatives. He started out breeding eight native Korean cows - gifts from his brothers-in-law - and sold them after two years. But he was disappointed by the quality of the meat and decided to search for a solution.

After trying various measures at the recommendation of other breeders, he discovered that mixing a feed of grains and fermented fodder could improve the quality of the beef.

Making mixed feeds is considerably more expensive than using traditional grain feeds, but “I knew that using expensive mixed feeds would be of greater benefit because of the increase in quality,” Kim said. “Breeders of native Korean cows use cheap feeds as prices increase, but it lowers the value of the cows, and producers end up with less profit.”

Since then, his livestock has sold at prices much higher than the average and he is well known in the local market for having a quality product. He sold a cow last June for 9.5 million won, and again in August for the same price when the break-even was 5.5 million won.

In December, Kim sold one of his bovines at a record-high price of more than 13 million won, with only the quality of the beef being taken into account. (When assessing meat quality, buyers often consider a number of factors, including the weight of the carcass and how the animal was fed and raised.) His cow weighed 770 kilograms (1,697 pounds) - much heavier than the average 600 kilograms - and the quality was judged the highest by Korean standards.

Kim attributes his success to the accumulation of knowledge he has built up over the past decade.

“Pick a promising field and do your best to become an expert,” he said, “and you will not fail.”