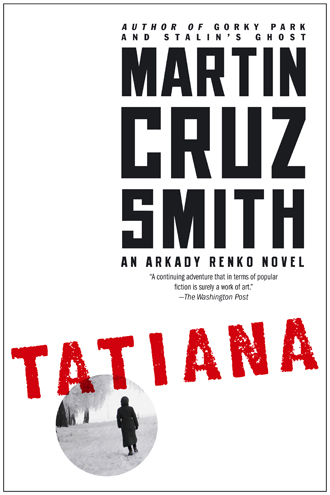 Arkady Renko, the investigator of “Gorky Park” fame, is back in Martin Cruz Smith’s latest novel, a little worse for the wear with a bullet lodged in his head from an encounter in an earlier novel.

Smith has a knack for putting the reader “there,” whether it’s Moscow, Havana (“Havana Bay”) or 19th-century England (“Rose”), and he does it again in “Tatiana,” transporting the reader to bleak Kaliningrad and a mobster-heavy Moscow. It doesn’t matter if you haven’t read the earlier Renko novels - Smith weaves in enough backstory to catch you up on his personal life, which is in a bit of disarray.

This time, Renko finds himself investigating the death of Tatiana Petrovna, a crusading Russian journalist clearly modeled after Anna Politkovskaya, the reporter who was murdered in 2006. Actually, he’s officially investigating the disappearance of Tatiana’s body, a task Renko’s boss agrees to in order to get the maverick investigator out of his hair. The authorities had already ruled Tatiana’s death a suicide, so there’s technically no homicide for Renko - a senior investigator for the prosecutor’s office - to investigate.

Renko starts sniffing out clues and suspects with Victor Orlov, a detective sergeant with a drinking problem. “Because of his drinking no one dared work with him but Arkady,” Cruz writes. (Why is it that so many lawmen in fiction - James Lee Burke’s Louisiana detective Dave Robicheaux, Harry Hole in Jo Nesbo’s thrillers from Norway - are heavy drinkers or reformed alcoholics? Must come with the territory.)

The novel is fast-paced, riveting and written with cool competence by Smith, who revealed in November that he was diagnosed with Parkinson’s disease in 1995. Unable to type, Smith spun out the novel by speaking the sentences as his wife punched them into a computer. The multi-tentacled plot centers around a notebook filled with symbols drawn by an interpreter using his own code and a scramble to decipher the contents. The characters are painted with nuanced brush strokes, from Renko’s semi-adopted son, Zhenya, a 17-year-old street-smart chess whiz, to a hit man with a fondness for crossword puzzles.

There’s a surprise twist that Renko (and probably the rest of us) discovers belatedly despite some clues. One of the climactic scenes aboard a ship stretches credulity, but strange things happen in fiction as well as life.

Smith has nailed it for an absorbing read.