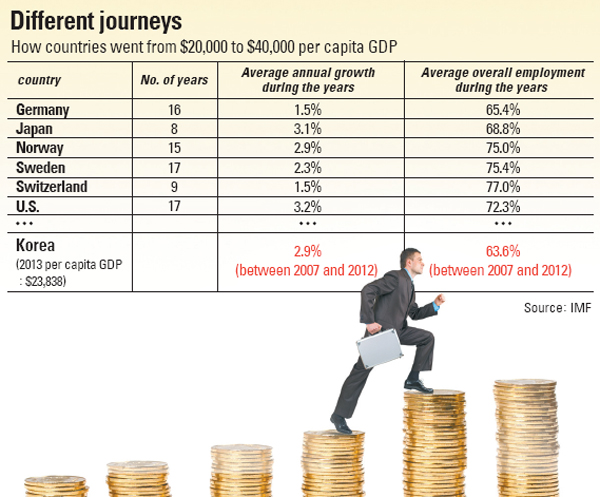 Korea needs to boost its rate of employment if it wants to reach the $40,000 per capita gross domestic product level, the Federation of Korean Industries (FKI) said yesterday.

Richer countries that reached that income milestone had overall employment rates that were much higher than Korea’s in the last five years, the FKI warned - higher by 5.7 percentage points on average.

The conclusion, drawn from the business lobbyist group’s own analysis of the International Monetary Fund’s World Economic Outlook report released last October, is a reproach to the employment plans of the companies represented by the FKI.

Despite the prospect of a global economic recovery, all but three of the country’s top 30 conglomerates are reported to be planning to maintain their employment at last year’s levels or reduce hiring.

The OECD tracked the economic histories of 22 countries with $40,000 per capita GDP or higher as of 2012. The FKI analyzed 17 from which employment data for the 15-64 age brackets were available.

According to the FKI, the countries recorded an average 69.3 percent overall employment rate for those age groups during the time when their per capita GDP was between $20,000 and $40,000.

The FKI also tracked the 22 countries’ annual growth rates before their per capita GDPs surpassed $40,000. The average growth rate of the countries was 3.6 percent, whereas Korea’s growth rate between 2007 and 2012 was 2.9 percent.

“That means Korea needs harder efforts to revitalize the economy to make that happen,” Kim said.

The FKI also found out that the 22 richest countries also had a strong base for their service industries before they joined the $40,000-per-capita-GDP club. The output from the countries’ service industry as a percentage of their GDP was 64.7 percent between $20,000 per capita income and $40,000 per capita income, as compared to Korea’s 59.2 percent between 2007 and 2012.

The Park Geun-hye administration considers the service sector a key spurring factor in realizing her ambitious “474” plan. The three goals in that plan are 4 percent GDP growth, a 70 percent overall employment rate and $40,000 per capita income.