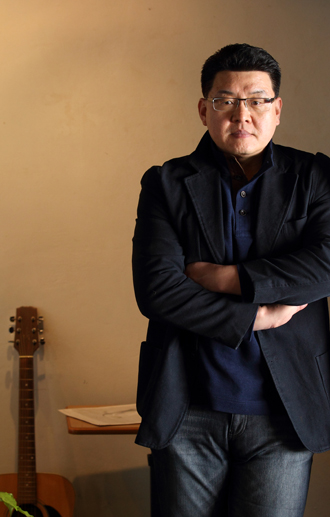 Director Yang Woo-seok managed to list his debut film, “The Attorney,” as the 10th blockbuster in Korea surpassing 10 million admissions over the weekend. By Lim Hyun-dong

“The Attorney” broke the 10 million admissions mark yesterday, just 33 days after its release. With the movie’s surprising popularity, many people have come to wonder about the man behind the film, whose name was unheard-of in the country’s film industry.

The man behind this box-office hit is first-time director Yang Woo-seok, 45. Yang made his name writing online comics, including “V,” which was based on the popular giant-robot animation from the 1970s, “Robot Taekwon V.” Yang’s “V” was in the process of development, but was never completed. After that, he made the webtoon “Steel Rain,” taking on the writing and drawing roles. Yang also works as a creative planning director at a computer graphics company Locus.

Despite being bombarded with interview requests from the media, Yang had been turning them down. Only recently, after the movie topped nine million admissions, did he quietly agree to sit down at the interview table.

Q. You probably have many things you want to talk about regarding the movie. Why did you turn down so many interviews?

A. I don’t know exactly when it started, but our society began to enjoy taking a couple of words together in a certain frame and creating an issue out of it, rather than focusing on the context itself. Already, so many Korean movies are embroiled in misunderstandings and prejudices. I was afraid that my ill-considered comments [during an interview] could cause harm to the film. I also thought no one will be interested to hear what’s coming from a man they never heard of. But I realized that millions of people have watched “The Attorney” and heard that those people want to listen to what the director has to say. I thought that continuing to keep my mouth shut was not the way to respond to the millions who took the time to watch my movie.

Why did you decide to make a film based on the early years of late president Roh Moo-hyun?

The poet Ko Un has been writing a poetry series since 1986 called “Maninbo,” or “Ten Thousand Lives,” which centers on historical figures. I wouldn’t dare to be like him, but I’ve always wanted to shed light on Korean history by looking the lives of the country’s leading historical figures. I first got interested in the character of the late president Roh Moo-hyun because of the Fifth Republic Hearings. The image of Roh rebuking the powerful and the influential people who ruled over the Fifth Republic, it was like the scary secret royal emissary of the Joseon Dynasty. At that time, so many stories about this man spread across the country, along with his background of being a judge with only a high school diploma and a human rights attorney. Watching how he lived his life, I wanted to look back on the country’s violent 1980s by making Roh the protagonist of the story.

So you thought about the story before Roh became the president, to tell your story through a “man,” not the “former president.”

That’s right. In 2002 when he was elected as the president, I scrapped the story. If I released “The Attorney” at that time, my story would’ve been no more or no less than the “songs of flying dragons” [propaganda]. During his presidency, I forgot about the story. Then the man, after experiencing the storms of life, left this world. I thought about the story that I had once scrapped, about two years ago while I had an opportunity to teach young students. Watching those students, whose life goal is to make a spectacular resume and get a decent job, I couldn’t help but to reproach myself and society for making our younger generation to be like that. By looking back to the ’80s, when things were more problematic than ever, I thought it would help us to straighten our thoughts again.

Did you want to turn the story into a film from the beginning?

No. I thought about writing a webtoon with the story. Then, coincidently, I met Choi Jae-won, the CEO of Wethus Film, the producer of the movie. While talking to him, he suggested why not turn it into a movie. I made a prudent response and told him that, “Since Roh passed away not that long ago, I think the movie would be possible about 10 years later.” But Choi insisted that we must do it now. That’s how it began and after a few months, I even became the director of the movie. Then actor Song Kang-ho joined the crew, and off we went.

It seems like that casting Song Kang-ho was the crowning achievement to the success of “The Attorney.”

That’s true. People around me tell me that I should give Song a piggyback ride to show my gratitude. So I really told Song that I’d carry him on my back, then lowered my body so he could climb on. But Song refused, laughing. I believe there are three main reasons behind the movie’s success. First is the great actor Song Kang-ho. Second is the charms of the main character, named Woo-seok, that Song was able to interpret. Third is the late president Roh Moo-hyun, who became the inspiration for Woo-seok.

Together with the success of “The Attorney,” real names were mentioned relating to the characters in the movie, and others who were used as inspiration.

Have you always wanted to become a film director?

I wanted to become a person who can tell stories. It’s true that I’ve been a film buff since I was young. By reading many books and watching a lot of movies, I wanted to have a go at telling stories, and by using the technical aspect well, I thought I could expand the scope of the story a lot. So I got interested in technology and got a job in the area. I wanted to learn about English literature and philosophy more systematically, so I pursued them as my majors at university. Then I got curious about science. I think I’ve broadened my fields of interest one by one.

You have so many titles. You are a director, a cartoonist and an ordinary employee at a CGI company.

I worked as a film producer then got interested in the technical aspect, so I got a job at a CGI company. My latest career is working as a film director. I had a go at establishing a company consisting of writers as well. I guess I’ve tried “storytelling” with my own life. It was also a hobby, having a go at many things in life. At this moment, I feel the same. I don’t want to cling to being a film director and want to work in many different fields.