For insurance executive, Korea a land of opportunity

For insurance executive, Korea a land of opportunity

AIA Life Korea CEO Daniel Costello is seen at the company’s training center for the Next AIA program, where more than 300 young Koreans were trained to become professional insurance agents. The center is in Jeong-dong, central Seoul. Photo by Park Sang-moon

Daniel Costello, chief executive officer of AIA Life Korea, sees huge potential for growth in the Korean insurance market while others see it as “saturated.”

“It has a lot of potential to grow still, even though it seems saturated from the outside people looking in, because Korea is very developed and many people do have insurance policies,” said the 52-year-old insurance veteran from the United States, who has been in Seoul for three years, in an interview with the Korea JoongAng Daily.

“The average death benefit in Korea is significantly below it should be, and Korea is one of most underinsured countries in Asia.”

In 2013, Costello backed up his opinion by introducing three successful initiatives. He launched two new insurance products for those denied coverage for pre-existing conditions and created a high-level recruitment program to train young Koreans as professional agents.

To demonstrate its firm commitment to the Korean market, AIA recently purchased a building in Sunhwa-dong, central Seoul, to use as a headquarters. From the main entrance of Seoul Station, people can see the red AIA logo, which Costello expects will expand the company’s brand recognition.

Costello, who has more than 25 years of international insurance experience, most recently was senior vice president for American Life Insurance, leading its life, annuity, accident and health product lines in Japan, the Middle East, Europe and Latin America.

AIA Group is the largest publicly listed pan-Asian life insurance group with operations in 17 countries and $147 billion in total assets. It is a leader in life insurance and serves more than 27 million individual and 16 million group policyholders.

AIA’s mission is to meet the savings and protection needs of individuals by offering a range of products and services including retirement savings plans, life insurance, and accident and health insurance. The group also provides employee benefit plans, and credit life and pension services to corporate clients. 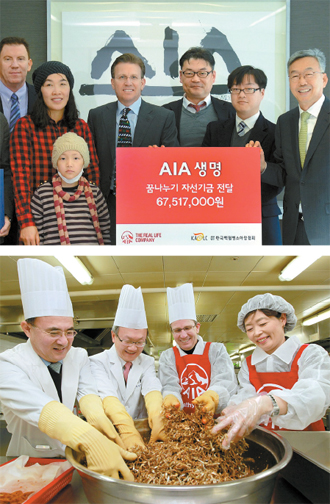 Top: Costello donates about 67 million won (63,170 dollar) to Kim Dong-soo, executive of the Korean Association for Children with Leukemia and Cancer, in December at AIA headquarters in Chungmuro, central Seoul. The money was raised by executives and employees of AIA Life Korea. Provided by the company. Below: Costello, second from right, makes food for cancer patients in at Ewha Womans University Medical Center’s Mokdong Hospital in December. Provided by the company

Q. How do you evaluate last year’s performance?

A. Last year was an important year for us in Korea. We introduced a couple of key products. One of them is Must Have, which is technically called “simplified issue full-in-hospitals (SIFIH)” insurance. It’s a product for people who had some illnesses and handicaps before getting insurance. It’s the first of its kind to be launched in Korea. Nobody else has it. Its sales hit 100,000 in eight months and reached 136,000 as of December. Then we came out with a senior cancer product that covers people from 50 to 70 with cancer. Like SIFIH, it targets those who have been diagnosed with cancer and denied coverage. We launched the Next AIA program last year. That’s designed to recruit the young generation, those aged 24 to 35 with one to three years of work experience and no prior insurance sales experience. We take them in and provide advanced training, mentoring and high-tech sales support, aiming for these young talents to lead AIA life sales and become MDRT (Million Dollar Round Table) members within two years. We pay those who qualify for this program up to 110 percent of their previous year’s average monthly income. Moreover, AIA Life offers 1 billion won ($942,894) to those are MDRT members for 10 consecutive years. This special long-term incentive is unheard of in the insurance industry. As of last year, 328 graduates completed the program and are currently working as sales agents (master planners) at AIA Life.

What was your most satisfying personal achievement last year, and how can it be related to business achievement?

My daughter graduated from university, which took 22 years. This personal achievement parallels AIA. We try to do things the right way to take time and build for the long term. We have been here almost 27 years and will be here for at least another 27. So we are trying to do something that is focused on stable, solid, long-term insurance decisions.

What does the purchase of the new AIA headquarters building signify?

Our commitment to the Korean market is there whether we have a building or not. But the building is a physical symbol of our long-term commitment to the country. We’ve always had that commitment, but now the symbol can be seen by everybody. It shows that we are taking a big chunk of money and investing it in real estate in the center of Seoul.

What does the Korean market mean to AIA?

In that respect, it’s very important to AIA. The value of new business is one of our key matrixes. The Korean market is big. There are significant opportunities to grow in Korea, even though it is considered a mature, saturated market.

But in insurance, we are creating the demand. There are a lot of people without insurance coverage. According to a Swiss Re study, Korea is No. 3 in Asia in terms of most underinsured people after China and Japan. They call it the “protection gap, the gap between how much protection people have and how much they really need. The research found there is an aggregate protection gap in Korea amounting to $3,615 billion.

Assuming there are about 25 million working people, we fear that the average breadwinner faces a $145,000 protection gap for their families. So the market still has great potential. For example, an average Korean family has four to five life insurance policies. Despite the seemingly sufficient coverage, the average policy is only about 56 million won, which is severely insufficient. So that’s what the Korean market means for AIA. It is in the top six and a big market.

Costello (far left) meets female trainees of the Next AIA program at the center. Photo by Park Sang-moon. Costello cuts a ribbon last April to celebrate the opening of the Premier Academy for the Next AIA program, where trainees can get intensive education on insurance sales through smart and mobile devices. Provided by the company

What were your biggest challenges last year?

The low interest rate environment was a huge challenge. Continuing to build agencies, one of our keys in distribution, and continuing to recruit people and convince them that this is a good career were also challenges. That’s the reason we created the Next AIA program. Making our telemarketing business more effective was another big challenge.

That’s why we came out with the Must Have insurance product that gave our telemarketing team something important than other companies didn’t have. The low interest rate environment isn’t such a problem for profits. It’s more of a problem for asset/liabilities management, which is matching your long-term assets with long-term liabilities. It doesn’t necessarily hit earnings today, but in the future, if interest rates don’t rise again, there will be a real challenge. If these low interest rates stay for a long period, then it will start pressing insurance companies.

How does an aging population affect the insurance industry?

I think it is a major opportunity for insurers because as people get older they have different insurance needs, but there are increasing needs for insurance, and they’ve got to save for retirement.

Most people haven’t saved enough. They get more illnesses. They still have families and liabilities that they want to have insurance for, so as people get older they have different and additional insurance needs. So there is a huge opportunity for us to be able to provide them with good value for money when they get older.

Can you compare Japan’s aging patterns to Korea’s?

I guess there are similar patterns, but I would say that Korea is probably 20 years behind. There is a huge opportunity to look at what the Japanese financial market and government have done to address aging problems and find what worked and what didn’t.

We don’t have to go the same direction as Japan because we have some time to fix that problem, but we need to begin addressing the aging society challenge now. We learned from Japan and came out with products for an aging society. That’s why we came out with the Must Have insurance.

As you get older, you have a few illnesses and that makes you ineligible for a lot of insurance even though you are healthy. We design insurance specifically for that. Korea and Japan have most advanced insurance products in Asia, but Japan has a little bit more variety.

As an insurance veteran, how are you preparing for your own post-retirement life?

The reality is you’ve got to start saving for retirement when you are 20. As soon as you get that first job, you should put aside money, because over time we are going to have to be responsible for our own retirement savings. We won’t be able to rely as much on the government or our employers. We will have to do more ourselves. The best friend of savings is time. Time makes money grow. 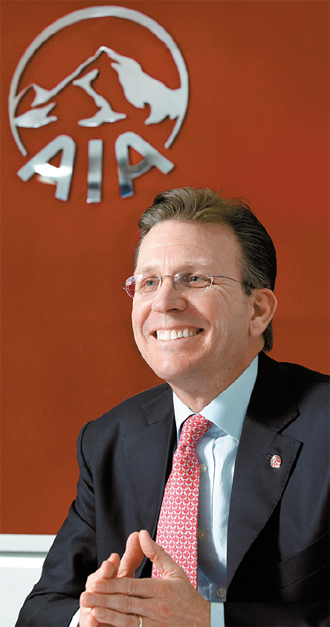