Some heady competition on tap for brewers

Some heady competition on tap for brewers 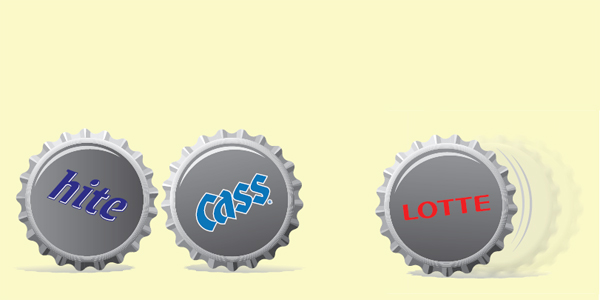 In front of each executive were five or six glasses filled with different types of brews, all tentatively called Lotte Beer. The purpose of the meeting was to decide which beer the conglomerate’s beverage affiliate will mass produce and introduce to consumers during the first half of this year.

“We expect [beer-drinking] meetings like this to take place several times in the coming weeks,” said an official from Lotte Chilsung Beverage. “The company’s development team is testing and producing dozens of beers.”

This spring, Lotte Group, the country’s leading retailer, will become the newest local competitor in the Korean beer market, which so far has been largely dominated by Oriental Brewery and Hite-Jinro.

With Lotte Group joining the competition, the 4 trillion won ($3.76 billion) beer industry will be dominated by three major brewers. The competition is likely to be fierce, especially since many sporting events like the World Cup in Brazil are taking place this year.

Lotte Chilsung invested a total of 180 billion won to build a brewery in Chungju, North Chungcheong. The company completed construction of the facility late last year and is able to produce 50,000 kiloliters, or 13 million gallons, of beer annually.

Although that production capacity is merely 2.7 percent of the domestic beer market, Lotte Chilsung says it is prepared to expand.

“We plan to build another brewery in Chungju by investing 700 billion won after seeing some response” to the new beer, said another Lotte Chilsung official.

If the beverage company builds another brewery, it will be able to produce 500,000 kiloliters of beer a year, more than 22 percent of the domestic market.

“The current two-way structure could be shaken with Lotte Chilsung putting its foot into the beer market in April,” said Shim Eun-joo, a researcher at Hana Daetoo Securities. “The company is equipped with a condition to create synergy based on the operating know-how it has from promoting its soju business and also its experience in retail operations.”

Analysts note that one of the strengths Lotte Chilsung has in promoting its own beer business is its distribution network. The company currently supplies Cheoumcheorum soju, water and soft drinks to consumers nationwide.

It also has deep pockets. According to a report by CEO Score, a website that analyzes corporate businesses, the ratio of internal reserves to net profit for Lotte Chilsung was 29,151 percent as of June last year, 17 times higher than the 1,668 percent average of the top 10 conglomerate affiliates.

“Although we don’t know whether or not Lotte’s new business will be successful, what’s for sure is that there will be dynamic changes in the market with more competitors doing business,” said an official from a local research firm.

There are also expectations about the taste of the beer Lotte Chilsung is expected to put out. The company has an 85 percent stake in a joint venture called Lotte Asahi with Japan’s Asahi Breweries.

The company also imports and sells Japanese beer in Korea.

“The beer products Lotte Asahi retails are mainly premium ones,” said Lee, chief executive of Lotte Chilsung. “The Lotte Beer [tentative name] that will be introduced into the market will be sold targeting a wider consumer group.”

Meanwhile, the two other competitors - Oriental Brewery and Hite-Jinro - are also aware of the coming changes and determined to rise to the challenge.

Hite-Jinro Chairman Park Moon-deuk is known to have sent an email to employees recently with a message that said, “raging soldiers never fail” and “no opponents are able to fight back soldiers that fight risking their lives.”