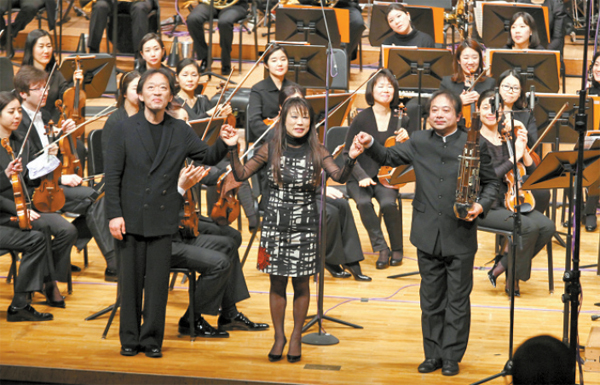 World-famous maestro Chung Myung-whun has been the permanent conductor of the Seoul Philharmonic Orchestra, the country’s foremost classical ensemble, for nine years. During that time, his main focus has been on developing the orchestra, and he says that will continue to be his only objective for as long as he stays.

Chung’s baton twirls must have worked like magic, because in August the orchestra will head to London to participate in the renowned “The BBC Proms,” the second Asian orchestra to be invited after Japan’s NHK in 2001. The Proms is an eight-week annual summer festival of orchestral classical music concerts held predominantly in the Royal Albert Hall in London.

“The venue is so special,” said Chung. “It can house about 7,000 people, and the audience can listen to it standing up or sitting down. The whole atmosphere is very enthusiastic and full of young people.”

Receiving an invitation to the Proms, Chung said, proves that the philharmonic is among Asia’s top orchestras.

“I tend to think that for an orchestra in Korea to reach the world level, it takes at least 20 years, that is if the members work as hard as they can,” said Chung. “But nine years ago, when I first joined the Seoul Philharmonic Orchestra, I felt impatient and said I’ll try to reach that level in 10 years. Next year marks the 10th year, and here we are. You can imagine how hard the members have worked for the past nine years.”

Since 2007, Chung has been taking the orchestra on worldwide tours as he believes doing tour concerts and recording albums are two of the best ways to help develop the group.

“An orchestra has to show the host a performance beyond their expectation to get invited again to perform in their countries. It’s like doing an audition every time we perform,” said Chung. “The Seoul Philharmonic Orchestra never missed on receiving that invitation.”

As for recordings, the orchestra has released six albums through a classical music label, Deutsche Grammophon, and has a long-term deal with the label, which is unprecedented, Chung said.

This year, Chin Un-suk’s three concertos featuring the sheng (a Chinese mouth-blown free reed instrument with vertical pipes), piano and cello will be released in July. In May, the orchestra will record Mahler’s 9th symphony.

Chin, a composer-in-residence for the Seoul Philharmonic Orchestra, has been organizing the “Ars Nova” series, which highlights contemporary experimentation in classical music since 2006.