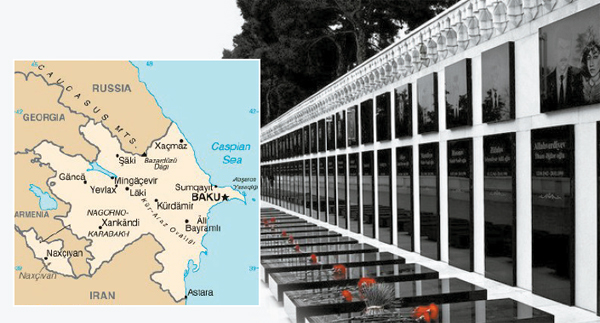 Twenty-four years have passed since “Black January,” when the Central Soviet Authorities perpetrated an atrocious crime against the people of Azerbaijan.

On January 20, 1990, 26,000 Soviet troops invaded Baku, the capital of Azerbaijan, in an attempt to crack down on the growing independence movement and to prevent the fall of the Soviet Communist regime there.

At the time, Azerbaijan was subjected to aggression from neighboring Armenia, which violated the territorial integrity of Azerbaijan, resulting in the occupation of Azerbaijan territory.

Armenia’s territorial claims and separatist activities were supported by the Soviet ruling regime at that time.

In the fall of 1989, the national independence movement had reached an incredible momentum, with hundreds of thousands of people struggling for the ideals of freedom, independence and sovereignty to preserve the territorial integrity.

Thousands of people protesting against policies of the Union of Soviet Socialist Republics (the USSR) held demonstrations all day long in the central square, now Azadliq or Freedom Square, and the streets of Baku.

The leaders of the Soviet empire perpetrated the Jan. 20 massacre in Azerbaijan, a republic with strengthening tendencies toward independence.

The invasion of Soviet Special Forces launched at midnight on Jan. 19, 1990. As a result, more than 137 civilians were killed, including 120 Azerbaijanis, six Russians, three Jews and three Tatars.

A total of 744 people were wounded, and 400 people were arrested and subjected to various forms of physical pressure. Four were reported missing. Those killed ranged in ages from between 12 and 73. Hundreds of other civilians were detained, harassed and tortured by the Soviet Army in the days and weeks that followed during Black January.

Along with Baltic countries, the national movement in Azerbaijan became one of the strongest in the former Soviet Union to courageously express the highest level of political discontent with the regime.

As a Human Rights Watch report entitled “Black January in Azerbaijan” stated, “Indeed, the violence used by the Soviet Army on the night of January 19-20 was so out of proportion to the resistance offered by Azerbaijanis as to constitute an exercise in collective punishment.”

On Jan. 21, 1990, Heydar Aliyev, who was living in Moscow at the time, came to Azerbaijan’s permanent representative office in the Soviet capital, flatly condemned the crime perpetrated by the USSR leaders against Azerbaijan and its citizens, and expressed support for his people.

“As far as the developments in Azerbaijan are concerned, I am convinced that they run counter to the rule of law, democracy, humanity and the principles of state building in our country,” said Heydar Aliyev in a statement made at the meeting, giving a political assessment of the tragedy.

A number of international organizations and foreign countries such as Turkey, Pakistan, Uzbekistan, Kazakhstan, Arab world countries and Iran also condemned the brutal attack of Soviet troops against civilians.

The people of Azerbaijan continued their just struggle until the achievement of the national independence of the country in 1991, which in itself stands as the best memorial for the victims of the Black January.

Although 24 years have passed already, Azerbaijani people continue to remember and commemorate the tragedy of Jan. 20 every year, which has been firmly rooted in the history of Azerbaijan as a Day of the Nationwide Sorrow.

Written by the Embassy of the Republic of Azerbaijan.