A street near the cram schools that prepare applicants for the civil servant exam is crowded with students on Jan. 11 in Noryangjin, southern Seoul. Before the class, students had a hurried lunch, eating a “rice cup,” or mixed rice and chicken served in a paper container that is sold by street vendors. By Kim Kyung-bin

With civil servant positions expected to significantly increase this year, the number of people applying for the posts has surged, with many seeking job security amid a sluggish economy.

According to the Ministry of Security and Public Administration, the total number of workers in the civil service sector is expected to exceed a record of more than 1 million in 2014. The expansion is part of government efforts to meet public demand for social welfare services and public security.

In particular, competition for ninth-level government positions has risen sharply. The second-lowest post in the South Korean government has proven especially popular among young job seekers despite its reputation for being a tedious administrative job with a low salary - officials typically make less than $20,000 annually.

“Because many part-time jobs have less than ideal working conditions, we are now seeing many people flocking to the public sector,” said Gwak Geun-ju, a professor of psychology at Seoul National University.

And because ninth-level civil servant positions don’t require a university degree, those with high school diplomas have been going up against their more educated peers to qualify for eligibility.

Kim Do-hyeop, a 20-year-old ninth-level official working at the local branch of the Office of Waterworks of Seoul city government in eastern Seoul, passed the ninth-level civil service exam holding just a high school diploma. He graduated from Gangseo Technical High School in western Seoul last February and passed the test in August.

“There are a lot of people who have a university diploma but can’t get a job,” Kim said. “So I thought, in this situation, rather than paying tuition for four years of university education, which is expensive, I can become a civil servant right after graduating high school.” 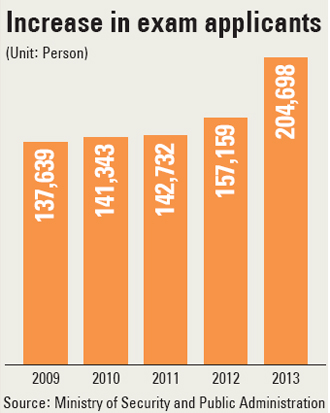 Ninth-level posts are also coveted in the older demographic, many of whom want a job with a guaranteed retirement age.

“I thought I could work until my [legal] retirement age,” said Kim, a 41-year-old who previously worked for an electronic-components manufacturer for 11 years. “But recently I started to become worried about the company’s restructuring plan.”

So in March he submitted his resignation and passed the ninth-level civil service exam, eventually landing a position in which he oversees technical services.

He said his monthly salary now is about 1 million won ($941) less than at his previous job, though he’s relieved to have the government-sponsored civil servant pension, which will provide him with about 2 million won per month after his retirement.

On Dec. 21, a local hagwon in Noryangjin, southern Seoul, was flooded with about 3,000 applicants who planned to eventually take the test. They gathered there to attend a free orientation that would familiarize them with the class.

“Although we usually hold these kinds of classes for students, we never have enough seats for attendees,” an official at the institute said.

When the JoongAng Ilbo visited a class given by a popular lecturer at the institute, more than 100 students were squeezed into the room. The body heat from so many people in such close quarters made the air so stuffy that administrators had to turn on the air-conditioner on a cold winter’s day.

Some students even put their notebooks in front of the entrance of a classroom before a popular lecture started, marking their place in line so they could occupy the front-row seats. Lines of notebooks marking good seats are frequently found outside classrooms here.

Some of the students are graduates from local universities outside the Seoul and Gyeonggi area. “I was told by my friend that I would not be able to succeed with a diploma of a local university outside Seoul,” said Park, a 24-year-old who graduated from a state-run university in Daejeon.

He said he usually gets up at about 6 a.m. every day and studies until after midnight for the exam. Park said he has spent about 1 million won per month preparing for the test, including the institute’s 400,000 won tuition.

On occasion, students have even asked the school’s manager to lock them into classrooms so they would be forced to study.

“Some of us applied for a ‘locked room,’?” said Yang, a 33-year-old who has studied for the test over three years at the institute in Noryangjin. “A manager at the institute locks the door to the classroom so we can study by ourselves for a certain period of time.”

The popularity of the ninth-level civil service exam has also begun shifting academic preferences at universities. “With the news that the government is planning to increase the number of police officials to 20,000 [over President Park Geun-hye’s five-year term], the department’s popularity rose,” said Kim Yeong-hyeon, a 24-year-old student at Kyonggi University’s Department of Police Administration.

Ninth-level positions have even gained a foothold among some elite students.

Jeon, a 26-year-old fourth-year student at Sungkyunkwan University, will graduate soon and said he applied to about 20 conglomerates nationwide but never got called back for an interview. So he decided to reassess his career options, working toward obtaining a ninth-level civil servant position. Jeon admitted that he had previously never considered such a position, regarding the job as one for those with no ambition.

“Now I think that it would be nice to work as a civil servant and have a comfortable life,” Jeon said, “rather than as a businessman working late into the night at a conglomerate.”