Farmers locked down to stop spread of avian flu

Farmers locked down to stop spread of avian flu 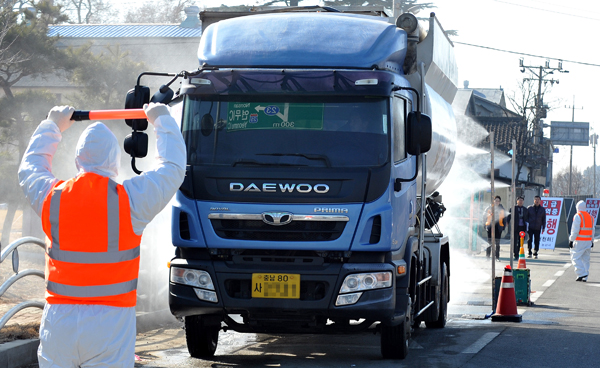 Quarantine workers sterilize a truck yesterday at an emergency post in Nonsan, South Chungcheong. As avian flu broke out in Gochang and Buan counties, North Jeolla, quarantine officials in the adjacent province of South Chungcheong are mobilizing to prevent the disease from spreading to neighboring regions. By Kim Seong-tae

In an all-out effort to contain the spread of avian influenza (AI), authorities imposed a 48-hour ban on the movement of poultry farmers and their vehicles in the Gwangju and Jeolla regions effective from midnight Saturday through midnight tonight.

It was the first time authorities instituted such a blanket ban. The preventive measure, a so-called standstill, came on top of quarantine and sterilization measures in place since the first report of an AI outbreak Thursday at duck farms in Gochang County, North Jeolla.

“In order to stop the spread of AI, the government issued the standstill order effective 12 a.m. [Sunday] in accordance with the Prevention of Contagious Livestock Diseases Act,” said Lee Dong-phil, minister of agriculture, food and rural affairs, at a press briefing yesterday at the Sejong Government Complex. “The order was an inevitable choice as there were additional reports of suspected outbreaks of AI in Buan County, which is near Gochang.” The minister said 69 percent of Korea’s duck farms are in the Jeolla region.

The standstill in Jeolla came after local quarantine authorities culled more than 90,000 ducks at poultry farms in Gochang and Buan counties in North Jeolla over the weekend. Entrances to those farms were closed.

The Korea Centers for Disease Control and Prevention identified the virus that killed ducks at the Gochang poultry farm as H5N8, which officials said has no history of infecting humans.

The center previously suspected the highly pathologic H5N1 virus killed the ducks in Gochang since the country was hit with the virus four times since 2003. Although there are no cases in Korea of humans being infected with H5N1, people in other countries have been infected.

When a human is infected with the H5N1 virus, symptoms similar to the flu, such as coughing, fever and headache, appear.

In the two days after the AI outbreak in Gochang, two farms in Buan also reported possible infections. As a preventive measure, authorities culled about 30,000 ducks from the county’s farms. The authorities confirmed ducks at poultry farms in Buan were infected with H5N8.

Aside from the slaughtering, the disease prevention center has intensified quarantine and sterilization measures in Buan as there are 438 poultry farms with nearly 4.8 million birds within a 10-kilometer, or 6.2-mile, radius of the infected farm.

The outbreak of AI has put farmers in the region on high alert.

“I sterilize the farm all day long; it is very serious here,” said Ma Gwang-ha, a poultry farmer in Yeongam County, South Jeolla. Ma, who had to bury 23,000 ducks to stop the spread of the avian flu in 2011, said yesterday he isn’t able to go home until 2 a.m. because he has to spray sterilizing agents for hours.

Officials have examined a flock of some 1,000 migratory birds found dead in a reservoir in Gochang, about 10 kilometers away from the infected duck farm, to see whether they were the AI carriers.

Since Korea had its first outbreak of a highly pathogenic AI virus in 2003, it has been hit by AI four times.