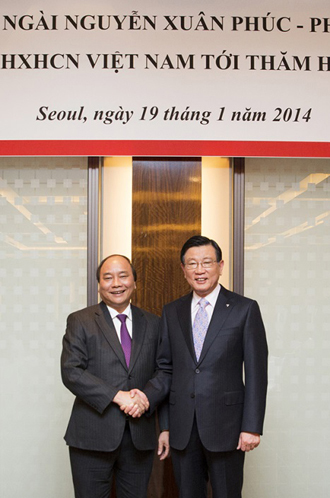 Kumho Asiana Group Chairman Park Sam-koo, right, meets with Vietnamese Vice Premier Nguyen Xuan Phuc at the Westin Chosun Hotel in Seoul on Sunday to discuss cooperation between the two countries. The deputy prime minister visited Korea earlier in the day at the invitation of the Korea Foundation. During the meeting, he thanked Park for the group’s investment in Vietnam as well as its cultural and social contributions to the country, the group said. Asiana Airlines, the group’s flagship company, opened a direct route to Ho Chi Minh City in 1993, becoming the first Korean airliner to do so. Kumho E&C set up an office in Ho Chi Minh City in 1995 and in Hanoi in 2007 and has constructed some of the country’s landmark buildings, such as Times Square and Sun Rise City, both in Ho Chi Minh City, it said. Provided by the company