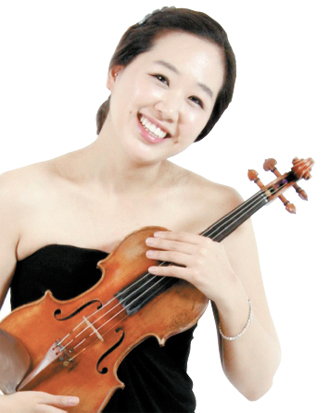 Violinist Ji-hyun Lee of the London Philharmonic Orchestra says social networking is the key to successfully passing auditions in Europe.

The London Philharmonic Orchestra was founded in 1932 by Sir Thomas Beecham. Conductor Kurt Masur made the orchestra even more famous all over the world. Last year, Lee joined the London Philharmonic as one of its first violinists. Before entering the orchestra, Lee was the concertmaster in the orchestra of the Paris Conservatory and gained much experience performing at an array of music festivals around Europe. Lee shared some of the tips that she tells her junior colleagues who dream of following in her path.

Q. Auditions for the London Philharmonic are known for their strict standards. Is that true?

A. Yes. Anyone can apply for an audition, but you need to pass the first stage, which is an evaluation of document records. Unlike other orchestras, where you can just do well in the live audition, get lucky and pass, the London Philharmonic differentiates itself by such an evaluation process. Once you get a trial with the orchestra, then you can perform and share some ideas about the music with fellow musicians. Based on the evaluations by the members of the orchestra, hopefuls get eliminated one by one.

Does that mean the London Philharmonic takes into consideration the performers’ social skills for the audition?

Absolutely. Many Koreans tend to think that if you graduate from the best school and win an award in a famous music competition, you can get a free pass to the global stage. But that is not true. The European music community is more profound and sophisticated. Networking is a must - in a good way. If you want to be a professional in your field, it is necessary for you to know people. Everyone tries hard to create good music in a friendly atmosphere, so you should definitely be a part of it.

What do you think future musicians should keep in mind?