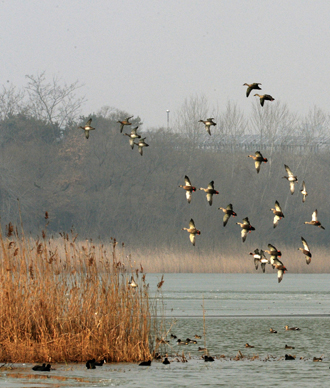 The government yesterday confirmed that avian influenza (AI) killed a flock of migratory birds at a reservoir in Gochang County.

If the birds were the source of AI outbreaks on poultry farms in the counties of Gochang and Buan in North Jeolla, more outbreaks could occur along their migratory route.

“We have confirmed that dead migratory birds collected from a reservoir in Gochang were infected with AI following an examination,” said Kwon Jae-han, a director with the livestock policy team of the Ministry of Agriculture, Food and Rural Affairs, during a press briefing yesterday at the Sejong Government Complex.

“The virus was identified as H5N8, the same type of virus detected among dead ducks at farms in Gochang. It is likely that ducks at the farms were infected with AI from migratory birds,” Kwon said.

Given the proximity of Donglim Reservoir, where some 1,000 wild Baikal teals were found dead last week, to duck farms with outbreaks, the connection was suspected over the weekend.

Over 100,000 Baikal Teal ducks are currently near Donglim Reservoir.

The Animal and Quarantine Agency examined 98 dead birds from the reservoir Sunday.

The Korea Centers for Disease Control and Prevention said the H5N8 virus has no history of infecting humans.

If the disease spreads along the birds’ migratory route, efforts by the government to contain AI over the weekend might be in vain.

Worries are especially acute in the Jeolla regions, where 69 percent of Korea’s duck farms are located.

Since the outbreak of bird flu last Friday, authorities have culled 190,000 ducks and chickens at poultry farms in North Jeolla and imposed a 48-hour ban on movement of poultry raisers and their vehicles in the areas.

Baikal teal ducks are known to migrate south to Korea around November every year from Siberia to spend winter here.

After settling near the Geum River in South Chungcheong, the Donglim Reservoir in North Jeolla and other southern parts of Korea, they migrate back to Russia in the spring.

The Environment Ministry said it estimated that 318,500 Baikal teal ducks were in the country in 2012, which is the highest number among breeds of migratory birds.

The ministry said it is closely monitoring 22 major habitats of migratory birds to see if additional numbers are found dead from AI. It advised people to refrain from visiting those sites.

“To prevent the spread of AI [from migratory birds], it is essential to keep farms safe from waste produced by them by thoroughly sterilizing poultry farms,” said Kwon of the ministry.

The latest news on AI infection with migratory birds has put farmers in the region on high alert.

“We don’t even leave the house for lunch with neighbors out of worries that we’ll spread the disease,” said Kwon Yong-jin, a farmer in Yeongam County, South Jeolla.

Since Korea had its first outbreak of a highly pathogenic AI virus in 2003, it has been hit by AI four times.

The most recent outbreak was in 2011, when the disease spread from South Jeolla to 25 other cities and districts. About 6.4 million ducks and chickens from 280 farms were culled.