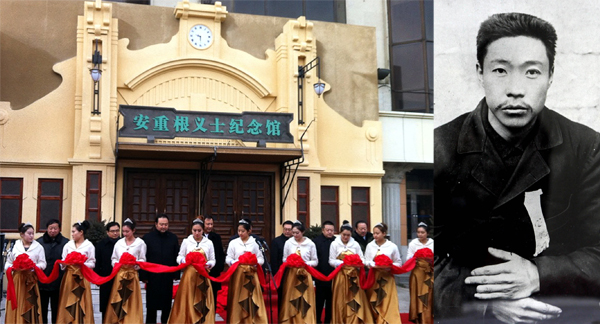 The Japanese government protested the memorial yesterday and called Ahn a “terrorist.”

The 200-square-meter (2,152-square-foot) memorial was opened in Harbin, the capital of Heilongjiang Province in northeastern China, at the location where Ahn fatally shot Ito, a four-time prime minister, in protest of Japan’s colonial designs over the Korean Peninsula.

The memorial’s entrance shows a clock face with hands frozen at 9:30 a.m., the time of Ito’s assassination. A plaque in Chinese marks the spot where the shooting took place on a platform of the Harbin Railway Station.

On the first day the memorial was open to the public, hundreds of people filled its hall.

A middle-aged man silently prayed in front of Ahn’s bust yesterday. Zhang Ping, 59, a retired local reporter, said in tears, “It’s too late ... Why is a memorial to Ahn Jung-geun only opening now?”

The memorial was a lifelong wish of Zhang’s father, an anti-Japanese activities who passed away five years ago. The wish was even stated in his will - that a memorial should be built to honor Ahn and also publicize the brutality of Japanese colonial rule.

The Chinese government held an opening ceremony Sunday at the Harbin Railway Station, though no Korean government officials attended the ceremony. The memorial commemorates Ahn’s life through exhibitions and displays. Entry is free.

Japan’s Chief Cabinet Secretary Yoshihide Suga said at a press conference yesterday, “Ahn Jung-geun, like we’ve said many times, is a terrorist who murdered our first prime minister and was sentenced to death.”

He said it was “extremely regrettable” that “such a result came about despite our government conveying our position.”

“Korea and China holding hands,” Suga said, “and spreading groundless assertions across the world on this situation based on unilateral views will not be helpful to the peace and cooperative relations of this region.”

The memorial is a step further than the monument President Park Geun-hye proposed during a Korea-China summit in Beijing in June last year. Korea has been requesting such a monument since 2006.

The Japanese media reported that the memorial was a sign of collaboration between China and Korea against the Shinzo Abe administration in Tokyo.

“China is showing its intention to pressure Japan through increasing cooperation with Korea on historical issues,” reported the Yomiuri Shimbun yesterday.

Korea’s Foreign Ministry “welcomed” the opening of the hall, and both ruling and opposition parties yesterday hailed the memorial of Ahn.

The Saenuri Party’s spokesman, Yoo Il-ho, said, “We look forward to this opportunity for Japan to repent for its erroneous rightist tendencies and trying to justify its past of aggression.”

Chinese media gave full coverage to the opening of the memorial and praised Ahn. The hall was build through investments by the Harbin municipal government and railway authorities.

China’s state-run Xinhua News Agency said in a global edition article yesterday, “The opening of Ahn’s memorial is not meant to inflict pain, but to shed light on the history of northeastern Asia.” It continued: “It stands as a remembrance of brutal Japanese colonization and the Chinese and Korean suffering that came with it.”

“Our government holds that it’s significant that a memorial commemorating Ahn, who is respected by both Korean and Chinese citizens, has been installed on this location,” a Korean Foreign Ministry official said. “We hope that through this Northeast Asian countries can meditate over Ahn’s noble spirit as conveyed in his essay, ‘On Peace in East Asia.’”