Seeing isn’t believing at this museum

Seeing isn’t believing at this museum 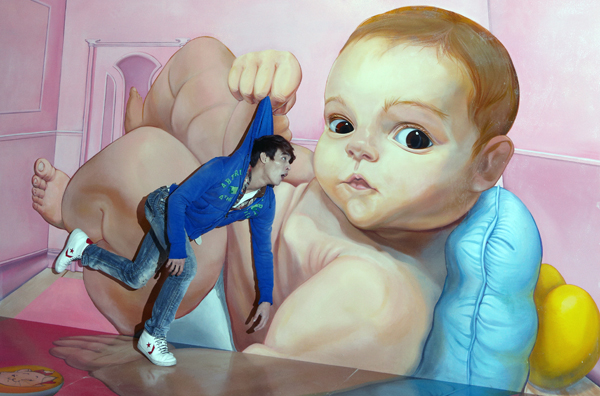 A visitor completes the “Giant Baby” installation by hanging his sweatshirt on the baby’s finger at the Alive Museum in N Seoul Tower, central Seoul. Provided by the museum

Museum have always been places big on rules: don’t touch, don’t make noise, don’t run around. But inside the Alive Museum, a museum dedicated to optical illusions and “trick art” in N Seoul Tower, on Mount Namsan in central Seoul, visitors need to break the rules - sometimes by lying down on the artwork, other times by touching the artwork and even by walking across them.

“The artworks are not completed unless the visitors get their pictures taken in front or inside of them,” said Lee Sang-gu, deputy general manager at the museum’s parent company, Creative Tong. “So it would be difficult to have the full experience of the museum if you visit alone.”

Trick art refers to art techniques that deceive the eyes of viewers. Also known as trompe-l’oeil, trick art is about using tricks of perspective to make 2-D images look 3-D, an illusion that is increased through careful use of light and shadows and other techniques. 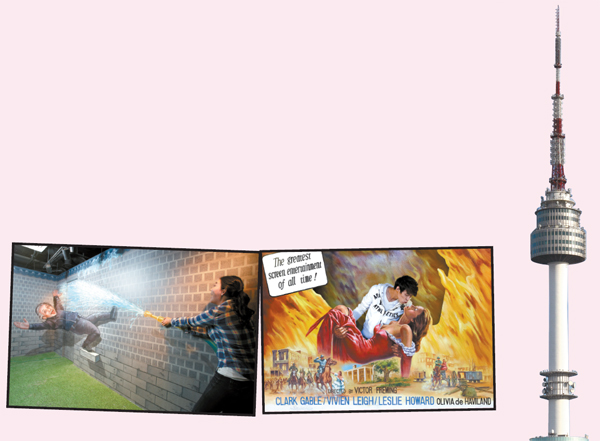 Visitors pose in front of the artworks, including a painting of Albert Einstein, left, and the poster from “Gone With the Wind,” right. Provided by the museum

“Our main goal is to maximize viewers’ participation by allowing them to be part of the art itself,” said curator Lee Hye-jeong. “This will let them feel a sense of connectedness to the art pieces. The key to this exhibition is the interaction between the viewers and the artworks.”

Lee added that they have deliberately mixed Korean traditional images with globally renowned images and art so that viewers from all walks of life can relate to the works. In the first gallery, viewers are confronted by a 3-D version of Leonardo da Vinci’s iconic “Mona Lisa.”

The exhibition applies its tricks to media art and works of art, until viewers find themselves thoroughly confused about what is reality and what is illusion. In the “Mouth of Truth” installation, famous from Audrey Hepburn’s 1953 film “Roman Holiday,” viewers will have to brace themselves for a surprise.

Visitors can also enjoy singing karaoke in the middle of the museum, another experience that blends art and participation, making the singers part of another exhibit, ominously titled “Horror Magic Mirror.”

Finally, the last part of the exhibition leads visitors to a mirrored maze filled with “Heroes in Seoul.” The mirrored zone is designed to look like the sidewalk near Deoksu Palace in downtown Seoul, but with global figures such as Mahatma Gandhi, Barack Obama and Steve Jobs on the scene. Superheroes like the Incredible Hulk and Superman also appear in the intricate maze, where viewers will need to clear a series of challenges to get out at last.

Since opening its first branch in 2009 on Jeju Island, there are now seven branches of the Alive Museum in Korea - two on Jeju Island, two in Seoul and others in Yeosu, Daecheon and Paju. An eighth branch is opening in February in Seoul.

The illusory museums are also springing up abroad. Since the first location opened in Hanoi in 2011, there are now additional locations in Xi’an, China, and Hua Hin, Thailand, with additional museums opening in Beijing, Bangkok and Istanbul in the next year.