Can the nation always be right?

Can the nation always be right? 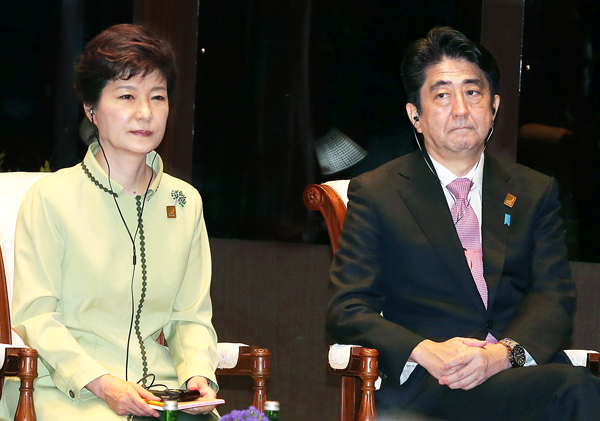 A few days ago, a New York Times editorial titled “Politicians and Textbooks” criticized both the leaders of Korea and Japan.

It argued that the two Asian statesmen push textbooks to reflect their political views. I was amazed by the content of the editorial, which appeared in such a prestigious newspaper. However, there are still things we need to reconsider. We can discuss the value of a gemstone by studying a pebble.

To compare the textbook-approval issue in Korea and Japan is slightly misleading, as the timing was coincidental. However, confusing the distortion of history with historical debate is a critical error. Everyone knows that Japanese Prime Minister Shinzo Abe wants to remove the shameful parts of history from his nation’s textbooks. The international community criticized the attempt to exclude wartime sex slavery and reduce the significance of the Nanking Massacre. Korea, China and most East Asian nations cannot tolerate the Japanese government’s attitude. Even in Japan, the view is supported by a few extreme conservatives.

So Korean officials were surprised by The New York Times’ comparison of President Park Geun-hye to Abe. When Seoul was discontented with the Japanese government’s attempt, The New York Times essentially said that the Korean president’s moves were no different.

President Park may feel wrongfully accused. The editorial claimed that she wants to hide her father’s collaboration with Japan and his dictatorial rule, but those efforts are fundamentally different from Japan’s efforts to distort history. The collaboration with Japan is a controversial issue in Korean society, and while Park Chung Hee’s military dictatorship is an undeniable fact, emphasizing his faults would make his accomplishments less appreciated.

The New York Times failed to understand the discord between progressive and historical views. As a reaction to the prolonged administrations of military dictators, a leftist ideology that defies rightist authoritarianism became more fashionable. Whether one means it or not, speaking of distribution and human rights makes it more chic.

The problem arose as the rightist administration felt cornered. The young generation is bound to be more progressive, and the administration doesn’t want to educate them as potential opposition group. So operation “Save the Rightist Textbook” began.

The textbook was so hastily prepared that it contained errors and flaws. While the Ministry of Education obviously favored and supported it, not many schools want to have their students learn from a book that writes that the independence army was “subjugated,” or that comfort women “followed” the Japanese Army.

But the real problem is just about to start. Because the ministry’s support was futile, the discussion of a state-designated textbook began. The minister mentioned it first, backed by ruling party lawmakers. When it was noted that no developed country designates which textbook to use, one lawmaker gave a ridiculous answer: “North Korea has a state-designated textbook.” So, to the editorial board of The New York Times, it seemed that President Park was pushing for it.

However, going back to state-designated textbooks can never happen. If the government designates textbooks, then we will suffer the consequences that The New York Times predicted.

Aside from ideological confrontation, no one can be certain that a nation will always make the right decision. State power is dangerous when it is strong. James Madison, considered one of the fathers of the American Constitution, said, “I believe there are more instances of the abridgment of the freedom of the people by gradual and silent encroachments of those in power than by violent and sudden usurpations.”

Amid the discords in the early days of the United States, Madison adhered to a moderate line to observe the principles of federalism while respecting the diversity of each state. His philosophy has a lot to teach us today. No matter how abundant a country’s resources, it is hard to surpass the power of collaboration among many.