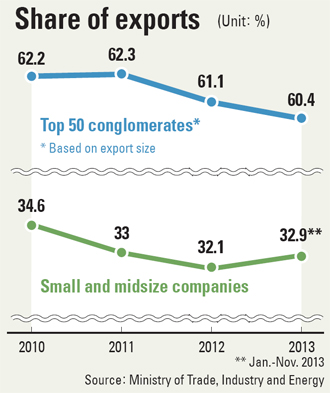 Small and midsize companies surpassed the conglomerates in export growth last year, while the total trade exceeded $1 trillion for the third consecutive year.

The Ministry of Trade, Industry and Energy announced yesterday that the smaller companies expanded their exports 4.4 percent from January to November last year, whereas the?top 50 conglomerates’ exports rose only 0.5?percent.? The smaller companies accounted for 32.1 percent of total exports, up 0.8 percentage point compared to 2012. The conglomerates accounted for a record 60.4 percent, a decrease of 0.7 percentage point.

“Meanwhile, the top 50 conglomerates’ contribution has slowed down gradually. Analysts and media reports say that Korean exports wouldn’t have been as great as when excluding those few ‘export conglomerates.’ However, this data figure explains that such a trend is disappearing,” a Trade Ministry official said.

The government said that the export growth was possible because products were largely diversified, whereas the country’s exports used to rely on goods or technologies in IT, auto and steel. Last year, dye and pigment products had the most growth at 24.5 percent, followed by cosmetics goods at 24.4 percent, security alarm facilities at 15.6 percent and plastic goods at 11.7 percent.

Another facilitating factor was free trade agreements. The government data showed that the small and midsize companies boosted their exports through FTAs with the United States and the European Union. The number of cases in which small and midsize companies used the Korea-U.S. FTA jumped almost 10 percentage points last year compared to 2012, and the number of Korea-European Union deals rose about 3 percentage points.

The government also said it will keep expanding trade insurance in a bid to better prepare for the strengthening won and exploring new markets.