Android OS does best in Korea

Android OS does best in Korea 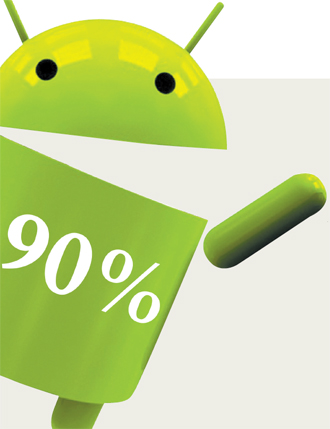 More than nine out of 10 smartphones in Korea operate on Google’s Android operating system, the market research firm Strategy Analytics said yesterday, the highest such ratio in the world.

The market share of the Android OS in Korea was 93.4 percent, the highest among the 88 countries analyzed.

Users of Apple’s iOS accounted for 5.1 percent of the Korean market, the seventh lowest out of 88 countries.

In the global smartphone market, Android users accounted for 67.5 percent of the market. In the Asia-Pacific region, it accounted for 74.3 percent.

“Korea’s Android user rate is highest because the three smartphone makers in the local market, including Samsung Electronics, LG Electronics and Pantech, are producing smartphones on Android OS system,” said an industry insider.

“The market share of these three mobile-phone makers accounts for 90 percent of the total market.”

Following Korea, Android was popular in Argentina, with 82 percent of the smartphone market, compared to China (81.8 percent), India (78.4 percent) and Iraq (77.9 percent ).

The lowest penetration for Apple’s IOS, even lower than Korea’s 5.1 percent, was in Sudan, Tanzania, Argentina, India, Iraq and Morocco, which showed 3 percent to 4 percent for iOS market share.

There was no country in which iOS had a higher market share than Android.

There were only five countries in which Android accounted for less than 50 percent of the market: Canada, Indonesia, Finland, Nigeria and Venezuela.

Meanwhile, Canada’s Blackberry was the top platform in Venezuela at 49.3 percent, and Microsoft’s Windows OS was most popular in Finland at 24.5 percent. Nokia’s Symbian OS was the highest in Nigeria at 29.5 percent market share.