On visit, U.S. officials to focus on North Korea

On visit, U.S. officials to focus on North Korea 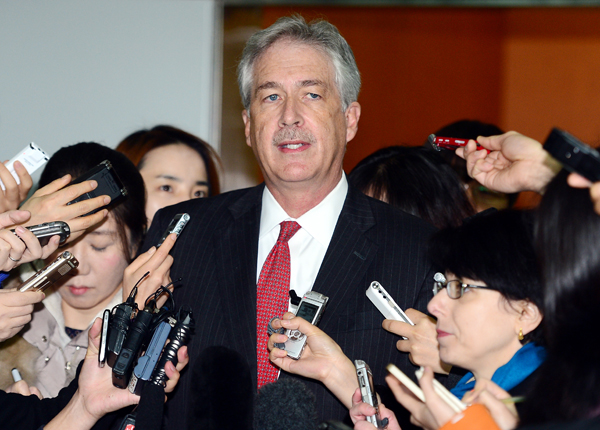 A series of high-ranking government officials from Washington are visiting Seoul this week to intensify discussions on North Korea, considered a top priority of the trip.

U.S. Deputy Secretary of State William J. Burns, on the first leg of his three-nation Asia tour, held talks yesterday with Vice Foreign Minister Kim Kyou-hyun, in which he emphasized the United States’ commitment to “dealing with the challenges posed by the [regime].”

Seoul and Washington “share a lot of concerns about the recent behavior of the [North Korean] leadership and the dangers, further reckless behavior and provocations in the future,” Burns told reporters yesterday.

This was a follow-up to high-level talks between Secretary of State John Kerry and Foreign Minister Yun Byung-se on Jan. 7 in Washington, when the two sides agreed to intensify negotiations regarding the situation in North Korea following the execution of Jang Song-thaek, the once-powerful uncle of North Korean leader Kim Jong-un.

According to the Ministry of Foreign Affairs, these talks were considered significant because they were Kerry’s first with a foreign minister this year and set the tone for the next stage after the two countries celebrated 60 years as allies in 2013.

Vice Minister Kim also conveyed that Tokyo needs to show consideration for progress to be made in relations between Seoul and Tokyo. He also discussed with Burns the efforts needed to ease instability in the region.

Burns is set to visit China and Japan before he heads back to Washington. In Burns’s visit to China, the two sides will likely discuss North Korea and its nuclear capabilities. In Japan, the Japan-U.S. alliance and Korea’s relationship with Japan are expected to be topics of conversation, a senior foreign affairs official said.

“Japan does lend an ear to Washington’s advice, so when we meet with U.S. officials, we try to explain why our relations with Japan are at a difficult position,” the official added. “It’s important that the message is sent to Japan. And what they do with it and if they translate that into a sincere signal are yet to be seen.”

Kim and Burns also discussed cooperation in regard to global issues, including a nuclear Iran and the situations in Afghanistan and Syria. They also talked about progress made in renewing the bilateral civilian nuclear cooperation pact and growth in economic cooperation through the Korea-U.S. free trade agreement.

Burns also pointed to the progress made in passing the Special Measures Agreement earlier this month on defense-cost sharing for U.S. troops deployed to Korea, which he said “is a reflection, I think, of the strength of our security relationship.”

Next, Florida Senator Marco Rubio, the highest-ranked Republican on the Senate Foreign Relations Committee, is slated to meet with Minister Yun on Friday during a three-day visit to Seoul, part of a weeklong Asia-Pacific tour including Japan and the Philippines.

On Sunday, Daniel R. Russel, assistant secretary for the Bureau of East Asian and Pacific Affairs, is also set to visit Seoul for one day to talk with officials here.

Russel’s visit follows trips to China and Japan and “can be considered a debriefing of talks that were held there,” a senior foreign affairs official said. “This also shows the United States’ consideration.”