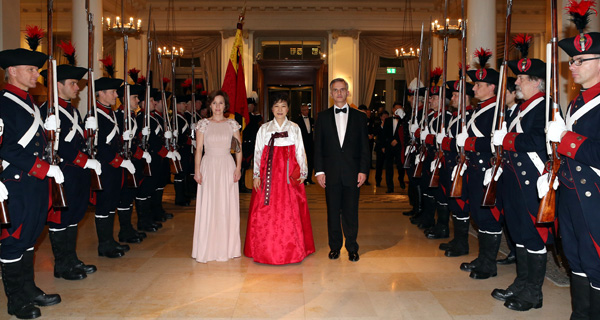 There, Park will deliver a speech in which she is expected to appeal for her “creative economy” initiative, a plan that would ensure future growth by assisting small and medium-size companies in the future-oriented science and technology industries.

A string of meetings with representatives from international corporations were also scheduled in Davos on the sidelines of the forum, according to the Blue House, including Qualcomm, a U.S. wireless semiconductor manufacturer; Siemens, a German engineering and electronics conglomerate; and Saudi Aramco, a Saudi oil company.

Soon after she arrived in Davos, Park attended the Night of Korea, a business conference that seeks to entice foreign investors to the country.

Since 2009, the conference - organized by the Federation of Korean Industries, an association of South Korean businessmen - has sought to educate foreign investors who attend the Davos forum about the business opportunities available in Korea. Nearly 400 business leaders were scheduled to attend, including those from JPMorgan, Morgan Stanley, Barclay Capital and the Government Pension Investment Fund of Japan. About 30 Korean businessmen from various conglomerates will also be present.

“[President Park] planned to spend most of her time during the state visit to Switzerland having one-on-one meetings with CEOs of international companies,” Cho Won-dong, the senior Blue House official for economic affairs, told reporters in Bern on Monday. “We can define the Davos forum as a sort of ‘IR’ [investor relations] for the nation.”

Before she departed for Davos yesterday, Park held a bilateral meeting with Swiss President Didier Burkhalter in Bern and signed 12 agreements intended to boost mutual cooperation between the two countries, particularly in science technology, education and job training.

Under the agreements, Switzerland agreed to accept 20 Korean students studying machinery and biotechnology each year and provide them with vocational training opportunities.

To boost bilateral investment between the two nations, they also agreed to exempt Korean or Swiss companies based in each country from paying national pensions and insurance to local workers.

When it came to North Korea, the Swiss president pledged to cooperate with South Korea in its efforts to denuclearize Pyongyang. Switzerland, a neutral European country, has its own diplomatic channels with the reclusive state.

“We agreed to seek international cooperation to convince North Korea to become a responsible member of the international community,” Park said yesterday at a joint press briefing with Burkhalter.

After the summit, the Korean president visited a local vocational school with about 7,000 students in Bern to assess the European nation’s job training programs. President Park will return to Korea tomorrow.