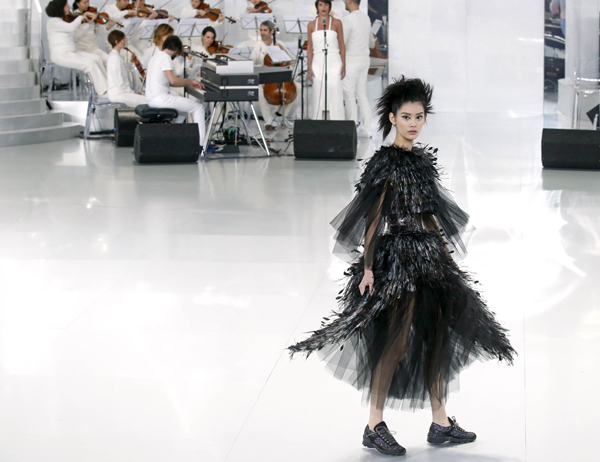 A model presents a creation by German designer Karl Lagerfeld for French fashion house Chanel as part of his Haute Couture Spring-Summer 2014 fashion show in Paris on Tuesday. [REUTERS/NEWS1]

PARIS - While most other fashion designers may settle for the usual trappings of their business - a dark room, straight runway and phalanx of bored-looking models - Karl Lagerfeld likes to have fun.

For Chanel’s haute couture collection in Paris on Tuesday, creative director Lagerfeld presented no less than an orchestra, a revolving stage, two curving staircases and over 60 suits and dresses in sorbet shades for Spring-Summer 2014.

Under the soaring ceiling of the Grand Palais, the rapt audience was treated to a frothy and oh-so-chic spectacle as models in sparkly sneakers skipped down the stairs to musical accompaniment.

“To give to very expensive, handmade, beautiful crafted clothes .?.?. an attitude of something everybody wears in daily life, that brings couture, in a way, to reality,” said Lagerfeld after the show, explaining the choice of footwear.

Silhouettes were cinched at the waist - no overeating for Chanel wearers this season - with corset skirts under cropped jackets in creamy pale ivories, lavenders and even a shocking Pepto Bismol pink.

A tight waist of black sparkles dramatically separated four tiers of pleated ruffles in metallic dove gray silk on the bodice of a dress from another ruffled cascade at the hem. In pairing sneakers with the highly embellished haute couture looks, Lagerfeld gave a nod to the prevalence of sportswear and displayed his trademark sense of humor.

Models emerged from an entrance at the crest of the double staircase wearing silver elbow - and knee-pads - presumably to fend off the hoards of women willing to kill for such an outfit.

The Paris shows, which run until Friday, are a prestigious showcase for a select group of couture houses whose garments are meticulously hand-sewn by highly skilled artisans.

Haute couture - which due to its prohibitive cost is worn by only a few hundred of the richest women around the world - has a minimal effect on a luxury brand’s sales, but it is a major marketing driver for the $275 billion global luxury industry.

The tried-and-true design motifs from the House of Chanel such as Peter Pan collars, black bows at the neck, crisp white cuffs and knubby fabrics all made an appearance this season, but there was not a pearl in sight.

Lagerfeld interrupted his decidedly pretty collection of elegant looks for Spring-Summer with a dose of show-stopping dresses that managed to be both avant-garde and beautiful.

Hair was spiky and worn in a tuft above the crown.

“I like the idea of something wild,” said Lagerfeld. “There’s a kind of fantasy up there.”

Lagerfeld played with lengths and fabrics, offering a long narrow pink jacket with tiered bands of sequins worn with skinny trousers, mid-thigh hot pants paired with a gamine and modest long sleeved top and a series of sheer dresses.

“There is a second dress, all embroidered and sequined, under the first dress. They look completely naked. But they’re not,” Lagerfeld said.