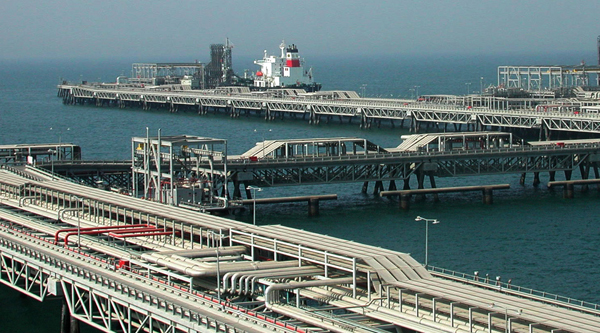 An industrial port in Jubail, Saudi Arabia. Hyundai Engineering and Construction’s winning of the bid for construction of the port in 1975 paved the way for a boom for Korean builders in the Middle East. Provided by the company

A windfall arrived on Feb. 16, 1975, when South Korea’s industrialization drive was shaken by a global oil shock. Hyundai Engineering and Construction won the bid to build a monumental industrial port in Jubail, Saudi Arabia, worth $930 million. That amount was the equivalent of nearly 30 percent of the Korean government’s annual budget. The deal paved the way for a boom for local construction companies and helped build Korea’s reputation in the Middle East, culminating in the recent achievement of $600 billion in overseas construction orders.

Since the 1970s, the Middle East has been Korean builders’ biggest overseas market. But they have been losing competitiveness and clients due to aggressive inroads by European counterparts that have been bidding with a weakened euro.

Due to an overall liquidity squeeze as a result of the global financial meltdown in 2008, owners and clients commissioning large-scale engineering projects demanded that bidders come up with the financing means to complete construction. The ability to raise funds for engineering, procurement and construction contracts now determines who wins major construction orders.

Moreover, companies from Japan, China and the United States are backed by public funding and state policy support in their bids for overseas infrastructure and industrial projects. The Export-Import Bank of Korea has begun sophisticated services in financial consulting and loan arrangements, in addition to traditional trade-financing services.

Korean companies have also turned their attention to value-added business opportunities in equity investment, procurement and the design and operation of infrastructure projects. Traditional construction orders no longer generate sizable profits. Demand for financial consulting services to facilitate awards and reduce risks in equity investment at home has been on the rise. Infrastructure and industrial projects have become larger and development and financial models more complicated, making it difficult for bidders to win orders simply from surety and assistance from a single or a few financial institutions.

In September 2012, Korea Eximbank and local banks were included in the financing package to develop and operate an integrated public transportation system in Colombia. And last May, Korean state-run entities and commercial banks financed a liquefied natural gas project in the United States. It was the first case involving a mix of public and private funds from Korea in loans for an international client.

South Korean exports have ballooned by more than 5,600 times in less than half a century after hitting the $100 million threshold in 1964. The country achieved its largest-ever trade surplus last year, maintaining the rank of a trade powerhouse with more than $1 trillion in trade for three consecutive years. Only Germany, China and the Netherlands did the same last year. The achievement is particularly notable because Korean companies survived two major financial crises. Now we aim to be a major player in the overseas market.

*The author is the chairman of the Export-Import Bank of Korea.