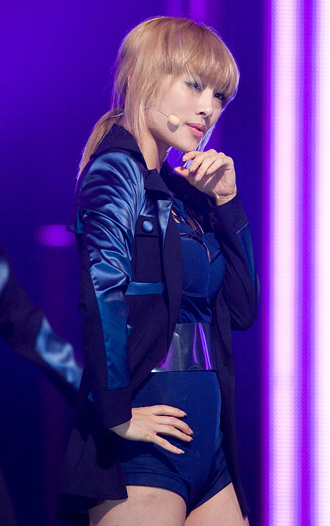 Now that Nicole has left the girl group Kara, rumors are flying about where the young singer might end up next.

Core Contents Media, home of girl group T-ara, was one agency mentioned in an earlier rumor, but yesterday Ilgan Sports, an affiliate of the Korea JoongAng Daily, shot those rumors down.

“We never talked to Nicole’s mother about an exclusive management contract,” said an official at Core Contents Media. “It looks like Nicole is looking at other agencies.”

The official also denied the possibility of Nicole, whose Korean name is Jung Yong-ju, joining T-ara.

Such rumors arose early yesterday after a Japanese publication reported the reason Nicole decided to leave her former agency, DSP Media, was because of her mother. It added that because her mother has connections within the local entertainment industry, she asked T-ara’s agency to sign her daughter.

In addition to rebutting the story from Japan, Ilgan Sports also reported that Nicole is considering signing with Wellmade StarM.

Nicole had been with Kara for about seven years, but she left the group after her contract expired last week. Instead of renewing the contract, she said she wanted to focus on developing her acting career.