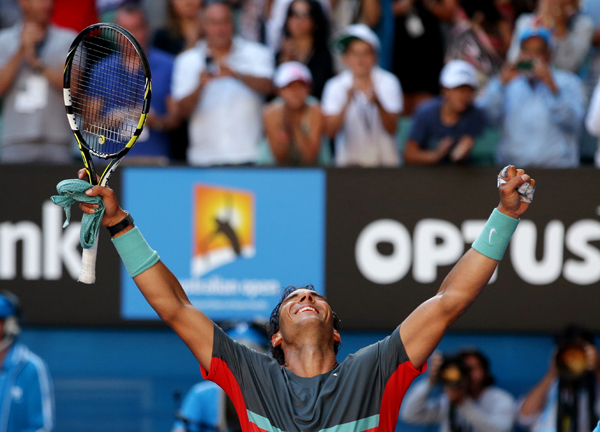 Rafael Nadal of Spain celebrates after defeating Grigor Dimitrov of Bulgaria during their quarterfinal at the Australian Open tennis championship in Melbourne, Australia, yesterday. [AP/NEWSIS]

Nadal, who received treatment several times for a nasty-looking blister on the palm of his left hand, advanced to a semifinal match against the winner of the marquee quarterfinal between Andy Murray and Roger Federer later Wednesday.

Azarenka won’t have a semifinal date. No. 5-ranked Agnieszka Radwanska stopped Azarenka’s 18-match winning run at Melbourne Park with a 6-1, 5-7, 6-0 win earlier in the day.

That means both defending champions went out in the quarterfinals - Novak Djokovic lost to Stan Wawrinka on Tuesday, ending his bid for a fourth consecutive men’s title. Aazarenka had been aiming for three in a row. Other women’s title contenders Serena Williams and Maria Sharapova didn’t even make it to the quarterfinals.

Nadal won on his fourth match point on Dimitrov’s serve in 3 hours, 37 minutes, a long time after his celebration following a second-set tiebreaker that more resembled a victory dance. He stayed in a squat position after his winning cross-court shot and then pumped his chest out three times.

There were more muted celebrations after a tiebreaker in the third set, with Nadal acknowledging Dimitrov let him off the hook with a wide forehand.

“I was so lucky,’’ he said. “It gives me the opportunity to be in semifinals of a tournament I love so much.’’

Nadal fended off three set points in the third set, including two in the tiebreaker, and won on his first set point.

He went up 2-0 in the fourth when he hit a passing backhand down the line on break point with Dimitrov standing at the net. At the end, Dimitrov appeared to wipe tears from his eyes with a towel as he walked off Rod Laver Arena.

Azarenka’s defeat left 2011 French Open champion Li Na as the only major winner remaining in the women’s draw. Radwanska next plays No. 20 Dominika Cibulkova, who won the last eight games in a one-hour, 6-3, 6-0 quarterfinal rout of No. 11-seeded Simona Halep earlier Wednesday.

Li, a two-time finalist in Australia, will play 19-year-old Canadian Eugenie Bouchard in the other semifinal.

Radwanska played drop shots and slices from the baseline, forcing Azarenka to come forward and then lobbing or passing her.

She didn’t fall into big-swinging rallies against the second-seeded Azarenka, either, continually mixing it up and saving the power for when she needed it.

“She was aggressive. She was making everything. She was guessing right,’’ Azarenka said. “I was just playing a little bit too predictably.

Radwanska was also safe on her own serve, dropping just two games while breaking Azarenka six times. She hadn’t beaten Azarenka in their last seven matches.

“I said to myself one day I have to have one step forward and do the semifinal, and I’m so, so happy that I did it finally,’’ Radwanska said of her first run to the semis of a major on hard courts. “I really had nothing to lose. She was defending the title, not me.”

Azarenka seemed to have momentum at the end of the second set, when she leveled after breaking in the last game. But she didn’t carry it through, pushing a forehand fractionally too wide on the first point and unsuccessfully challenging the out call.

It was a sign of things to come. She won only 14 points in the deciding set. AP