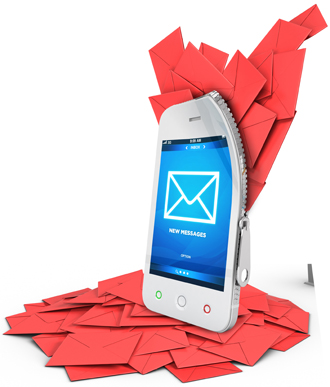 The Ministry of Science, ICT and Future Planning said yesterday that phones will be blocked from sending text messages listing a false return phone number, beginning in February.

SK Telecom will start blocking false ID numbers from Feb. 1 and KT and LG U+ will begin on Feb. 4.

The ministry said it would add landline phones that have text message functions before June.

The ministry, together with local mobile carriers and smartphone makers, blocked the ability to change the caller ID on text messages for new mobile phones at the end of 2012.

For older, Android-based smartphones, the feature is disabled once users upgrade the operating system to Jelly Bean 4.1.

Apple iPhones have never had the option of changing the caller ID when sending text messages.

However, Android users with older versions of the operating system were able to continue using the feature, which many people exploited for sending spam and phishing scams as well as for sending threats to people anonymously.

In addition, it found an increase in the number of fraudulent text messages related to year-end tax settlements and updating public certificates for 2014 since January.

The ministry expects these new measures will eradicate the use of mobile phones to send phishing messages.

Meanwhile, the ministry is also preparing additional measures to prevent the abuse of text messages sent from the Internet, which currently has few controls because there is no way of confirming caller numbers.

Such messages accounted for 58 percent of all spam messages in 2013 and 78 percent of fraudulent text messages, the ministry said.

A text message sent by Internet is often called a “web to phone SMS,” and the service is provided by around 100 mobile operators, including many small carriers, which allows massive numbers of messages to be sent at once.

First, the ministry plans to implement a preregistration system for caller IDs and strengthen measures to prevent manipulating the calling number, should a revision to the Telecommunications Business Act pass the National Assembly.

Furthermore, it plans to work with SK Telecom, KT and LG U+ to add identification information such as “sent from the web” messages to text messages sent from the Internet beginning in June. The ministry hopes such messages can make consumers more aware of potential fraud.

In addition, individuals will get the ability to block stolen or manipulated phone numbers, as the Korea Internet and Security Agency already provides to public agencies and private business.

The service detects if existing phone numbers have been used for web to phone SMS calls and automatically blocks the messages.

“In order to create a safe and convenient telecommunications environment, the ministry will strive to pass the amendment to the Telecommunications Business Act, which mandates mobile carriers prevent manipulated phone numbers in text messages, at the National Assembly as soon as possible,” said Kim Joo-han, director of the Communications Policy Division at the ministry.

Meanwhile, local mobile carriers and portal companies are rolling out mobile applications that could help detect both fraudulent messages and whether malware is included in messages.

KT said its affiliate KTCS has introduced a smartphone app named Who Who, which identifies dangerous URLs included in SMS messages. A user can find out whether there is a malware file included by using Who Who to examine a URL included in a text message.

It is a free Android app, based on the nation’s largest phone number database of 22 million numbers, and informs users about incoming phone calls and text messages

“The download of Who Who surpassed 4 million in the country and around 4.5 million phone numbers are updated and 70,000 spam [messages] are reported every day,” said a spokesman for KTSC.