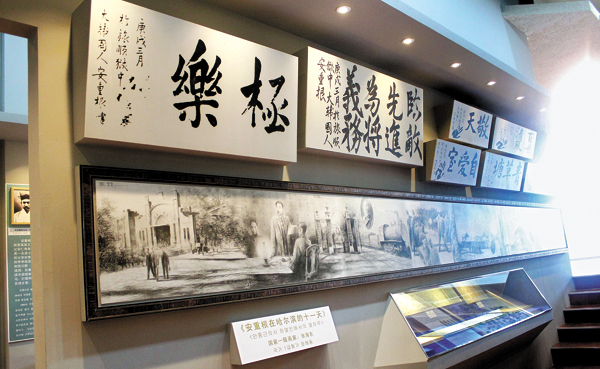 A group of senior Saenuri Party lawmakers called for the remains of independence fighter Ahn Jung-geun to be repatriated to Korea.

Ahn was recently honored with a memorial in Harbin, China, where he assassinated Hirobumi Ito, the first Japanese resident-general of Korea and four-time prime minister, on Oct. 26, 1909.

Ahn was executed by the Japanese in 1910, and the location of his remains are a mystery.

At a meeting of senior party members yesterday, Saenuri Party Representative Won Yoo-chull said, “The Chinese government opening the Ahn Jung-geun memorial is a fruition of the Korea-China friendship and a milestone toward peace in Northeast Asia.”

In response to a JoongAng Ilbo report on the trial procedures that led to Ahn’s execution, Won said Saenuri lawmakers will formally propose to North Korea to resume a project to recover Ahn’s remains, a joint project between North and South Korea that has been idle since 2008.

On Tuesday, the JoongAng Ilbo reported details of the unfair trail of Ahn. Ahn assassinated Ito in territory claimed by the Qing Empire that was administered by Russia, and the case should have been under Russian jurisdiction. A preliminary hearing was held by the Russian military police.

The Japanese took custody of Ahn soon after and imprisoned him in Lushun, formerly called Ryojun or Port Arthur, in north China.

Following a rushed trial, Ahn was hanged by Japanese officials the following year on March 26, 1910, at the age of 30.

Legal scholars point out that if he had been tried under Russian law, he may have received a lighter sentence because his actions could have been ruled as an agitation for the independence of his home country.

Before his execution, Ahn wrote in his will, which can be viewed at the memorial in Harbin, that he wanted to be buried in Harbin Park, near the spot where he assassinated Ito. He also wrote that he wanted his body returned to his homeland after Korea achieved independence from Japan.

China, North Korea and South Korea have made great efforts to search for Ahn’s remains.

Won said that a National Assembly committee dedicated to preventing distortion of history education, which is comprised of 95 ruling and opposition lawmakers, will be active in a project to find Ahn’s remains.

“It is a historical courtesy that Japan should abide by requests to release information needed to retrieve Ahn’s remains,” Saenuri Representative Kim Eul-dong said at the meeting. “If Japan doesn’t actively cooperate in this, it will be difficult for Korea to hide its regret.”

Kim is a granddaughter of Gen. Kim Jwa-jin (1889-1930), a war hero who fought against Japanese imperialism.

In 2011, she sent a letter requesting the recovery of the remains of Ahn to Takeaki Matsumoto, then-foreign minister of Japan and the great-grandson of Ito.

Japan has ignored requests for information on Ahn’s remains.