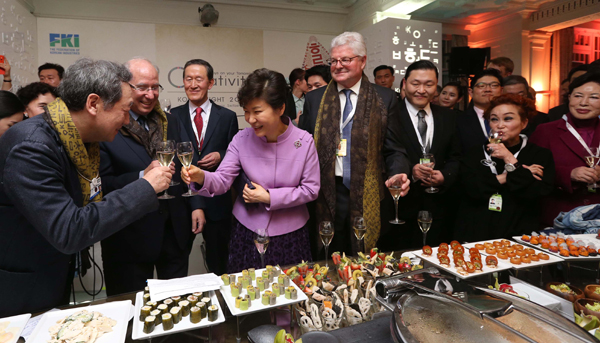 President Park Geun-hye told global corporate and political leaders in a speech yesterday at the World Economic Forum in Davos, Switzerland, that entrepreneurship should be the driving force for the world to achieve sustainable and comprehensive growth.

She urged leaders to come up with concerted guidelines to promote entrepreneurship, which she dubbed the “Davos consensus,” in her address at the first general meeting of the 44th annual Davos forum.

“For entrepreneurship to develop, the government should remove barriers, establish a financial system that jointly burdens risk with entrepreneurs and [establish] another system that enables those who have failed to gain their footing,” she said during a 15-minute speech in English.

The president was referring to the government’s plan, which she announced earlier this month in her New Year’s address, to lift as many regulations as possible, particularly those that hinder new businesses.

The president also stressed the importance of having a “creative economy,” one of the Park administration’s key catchphrases that she has repeatedly addressed in other speeches over the past year.

“For sustainable and comprehensive growth, not partial complements within an existing paradigm, such as macroeconomic policies or labor market policies, but a paradigm shift is necessary,” she said. “The world is in desperate need of the power to change the existing order by leaping beyond the limit and to reshape a new world. Korea is searching for the power from creative economy.”

Korean singer-rapper Psy, of “Gangnam Style” fame, also stepped out to assist the president at the Davos forum on Tuesday at the annual Night of Korea, promoting Korea’s creative economic drive.

“My job as a singer, and a singer coming to the World Economic Forum, I believe, is part of the creative economy,” he said, proposing a toast in the presence of about 550 global figures. A few attendees shouted “Gangnam Style” in unison in response.

Psy also introduced bibimbap, a traditional Korean rice dish mixed with vegetables, marinated beef and gochujang, or hot red pepper paste. About 80 different Korean dishes were served at the event, which was hosted by the Federation of Korean Industries, the nation’s top business lobby.

The agreements finalized at the meetings were not made public as of press time. Japanese Prime Minister Shinzo Abe was set to deliver a speech six hours after Park’s in a separate meeting, but conversation between the two leaders never materialized.

President Park was scheduled to depart for Zurich to fly back to Seoul today, wrapping up her eight-day trip.